The hospital has been catering to critical cases from four districts — Srikakulam, Vizianagaram, Visakhapatnam and East Godavari, and presently has 390 patients and 540 beds.

VISAKHAPATNAM:The Visakha Institute of Medical Sciences (VIMS), which has been designated as a State Covid hospital, is plagued with a severe staff crunch. Just four nurses per shift take care of each block, which houses about 120 patients.

The hospital has been catering to critical cases from four districts — Srikakulam, Vizianagaram, Visakhapatnam and East Godavari, and presently has 390 patients and 540 beds with the needed infrastructure. However, the shortage of staff has been a cause for concern.

“There is an acute shortage of staff, but more cases are still being admitted,” VIMS director Dr S Varaprasad told TNIE on Sunday, after videos emerged in which patients alleged they were not given proper care.

“Four nurses in a shift have to look after 120 patients. There are 10 doctors, who work in three shifts, and we are doing our best with the available staff,” Dr Varaprasad said. He, however, did not elaborate on the exact number of nursing staff allocated to the institute.

Reacting to a video that showed a woman in one of the wards lying unattended on the floor, the director said the doctors were doing all they can for the patients, despite the threat of Covid-19.

He said the woman in the video fell down while returning from the washroom on Saturday night, and the staff soon attended to her, but before that, the other patients shot a video and sent it to the media. In a release issued later, the director said the woman is in the ICU and is in a stable condition.

Stating that the government is providing quality medical care free of cost to all Covid-19 patients, the director said any complaints or grievances can be lodged with 104, which is monitored at the state level, or lodge complaints with the district control room (0891-2501255/56/57).

In a video circulated online, patients complained that the medical services at the hospital were inadequate and many of them were facing severe hardships. They alleged doctors were not available even for emergencies.

“One patient died as there was no one to help despite the patient’s repeated cries for help. More than fear of the virus, it is the poor services at the hospital that is a cause for concern,” they complained.

One of the patients, in the video, said the sanitary condition at the hospital is poor, and there is a stench all around. The patients also said they were not given bed sheets, and the beds are not sanitised after a patient dies or gets discharged.

“The condition of the patients is pathetic, though the hospital has all the needed facilities and infrastructure. There are no doctors or nurses to attend to patients after 10 pm. It would be helpful if we were at least given a helpline to call for assistance in case of an emergency,” the patient said.

Meanwhile Visakhapatnam district collector V Vinay Chand clarified that a total of 100 nurses were deployed to VIMS for all shifts. Further recruitment of 213 nurses will be completed in a day and there would not be any shortage of nurses to take care of the patients at the hospital, he said. 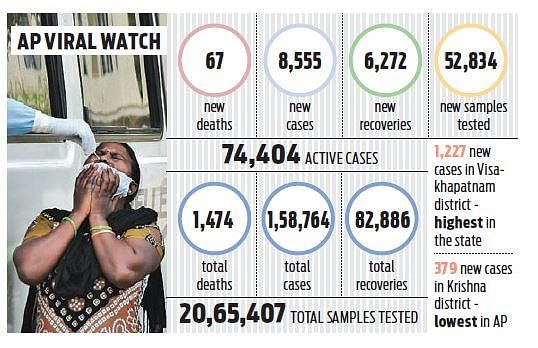 Now we are on Telegram too. Follow us for updates
TAGS
Visakha Institute of Medical Sciences VIMS COVID 19 Coronavirus