School syllabus to be condensed by 30-40 per cent: Andhra Pradesh minister Adimulapu Suresh

The government has prepared a standard operating procedure for schools to follow once they reopen.

VIJAYAWADA: With schools set to reopen on September 5, almost 90 days behind schedule, the state Education department has decided to redesign and condense the syllabus by 30-40 per cent. This will be done based on the number of working days available, Education Minister Adimulapu Suresh told TNIE on Friday.

"We have lost almost 90 of the 222 working days," he pointed out, but asserted that there would be no change in the pattern of conducting exams or in the question paper format.

"We have given syllabus-related workbooks to government school students, and have launched Vidya Varadhi vehicles to conduct classes across the state. We understand that as per the government’s decision, students in private schools have not been able to have online classes. As it is difficult for both teachers and students to complete the entire year’s syllabus in just six months, we decided to condense the syllabus," Suresh said.

But no decision has been taken on which parts of the syllabus will be excluded. "State Council of Educational Research and Training (SCERT) officials are deciding which parts can be removed from each subject for each class. Once schools reopen, students and parents will be informed about this," the minister said.

Students of Classes 1-8 won’t have any exams, and will be assessed on their internal projects and class participation, but students of Classes 9 and 10 will have exams. The government has prepared a standard operating procedure for schools to follow once they reopen. "Each school must conduct fortnightly health check ups and record the details of every child," Suresh said. 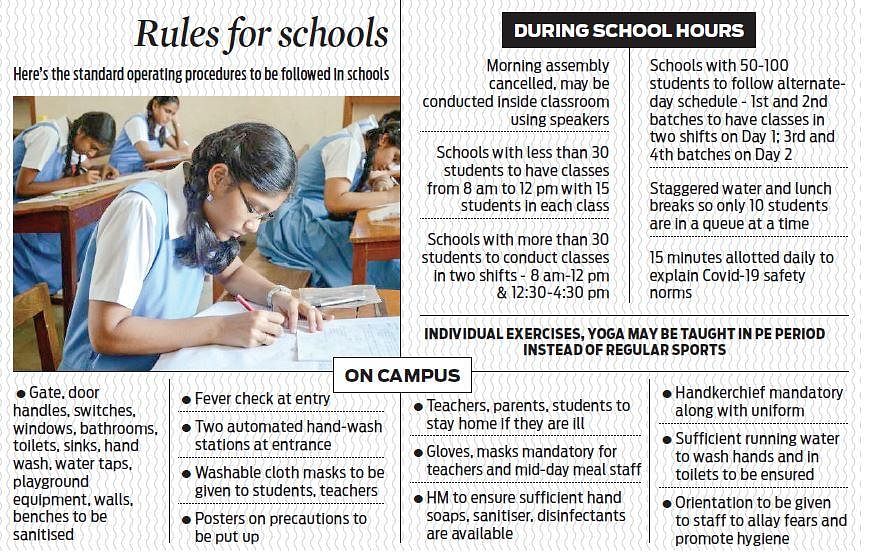 Saturdays to be 'no school bag days'

Saturdays will be “no school bag days”, the Education Minister said, and explained that these days may be used to entertain students with movies and activities to relieve stress and anxiety caused due to the pandemic. Dry ration will be given instead of mid-day meals until the situation normalises

Morning assembly to be held in classroom

Students won’t gather for morning assemblies as they will be cancelled or may be held in classrooms using speakers, as per the state government’s new rules, which also say that water and lunch breaks should be staggered so not more than 10 students gather in a queue at a time

More from Andhra Pradesh.
Now we are on Telegram too. Follow us for updates
TAGS
Adimulapu Suresh SCERT Andhra Pradesh chool syllabus