The Union Ministry of Health and Family Welfare recently released details of the first phase of the National Family Health Survey (NFHS)-5 (2019-20) for 17 states and five union territories.

VIJAYAWADA:  The Union Ministry of Health and Family Welfare recently released details of the first phase of the National Family Health Survey (NFHS)-5 (2019-20) for 17 states and five union territories.
Field work for the survey was done between July and November 2019 by Sigma Research and Consulting Pvt. Ltd.  As per the new data, Andhra Pradesh’s sex ratio has widened to 1,045 females per 1,000 males against 1,021 females per 1,000 males during NFHS-4, conducted four years ago.

While the population below 15 years of age has dropped to 22.2 per cent from 23.7 per cent, registration of children under five years with the civil authority increased to 92.2 per cent from 82.7 per cent. There is also a slight increase in the number of households with access to electricity (from 99.2 per cent to 99.5 per cent). 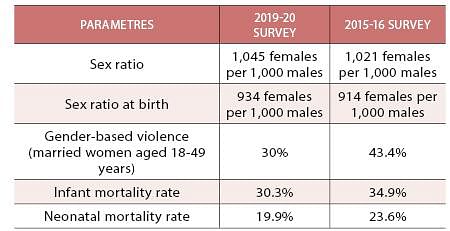 The percentage of women with 10 or more years of schooling has increased from 34.3 per cent to 39.6 per cent. However, the same for men has reduced to 47.9 per cent from 51.3 per cent. As Ayushman Bharat AB-PMJAY and Pradhan Mantri Surakshit Matritva Abhiyan (PMSMA) schemes were not completely rolled out during NFHS-4, details of a few categories were not available. Overall, literacy rate among men is 10.9 per cent higher than among women (68.6 per cent). Also, more men have access and have used internet.

Though the number of child marriages has reduced, the number of women, aged 15 to 19, who were already mothers or pregnant at the time of surveys, has increased. The percentage of women in the age group of 20-24 years, married before 18 years of age during NFHS-5 is 29.3 per cent against 33 per cent during NFHS-4, while that of men (aged 25 to 29 years, married before 21 years of age) has reduced to 14.5 per cent from 15.8 per cent.

The infant, neonatal and under-five mortality rates have also dropped to 30.3 per cent (2019-20) from 34.9 per cent (2015-16), 19.9 per cent from 23.6 per cent, and 35.2 per cent from 40.8 per cent, respectively.
Meanwhile, Andhra Pradesh and Meghalaya are the only states, among the 17 surveyed in the first phase of NHFS-5, where the proportion of women with unmet need for family planning has not declined.
As many as 31.2 per cent children under five years had stunted growth in 2019-20. The percentage of under-weight children, under five years of age, has also decreased to 29.6 per cent from 31.9 per cent. The percentage of children (six to 59 months) who are anaemic has increased to 63.2 per cent.