Urges it to release Polavaram and GST dues, additional funds to tide over Covid-19 crisis

VIJAYAWADA: Finance Minister Buggana Rajendranath Reddy has urged Union Finance Minister Nirmala Sitharaman to release Polavaram project reimbursement and GST dues to the State at the earliest. He also sought additional funds from the Centre for Andhra Pradesh, which is facing financial pressure due to Covid-19 crisis.

Speaking to media persons after meeting the Union Finance Minister in New Delhi on Friday, Buggana said that due to Covid-19 crisis, the urgent issues pertaining to AP could not be discussed with the Centre for the past few months.“In the meeting with Nirmala Sitharaman, we discussed issues related to reimbursement of Polavaram project funds and backward region development funds and funds for various development programmes under the AP Reorganisation Act, PDS and GST dues,” the minister said.

Apart from release of various dues to the State, hand-holding by the Centre was sought in the form of additional financial help to AP in the time of crisis. Chief Minister YS Jagan Mohan Reddy explained each and every issue in detail and the same was conveyed to the Union Minister, he said.

Buggana said reimbursement of Polavaram project works amounting to `3,500 crore and `3,000 crore GST share are due from the Centre. “Revenue gap reimbursement of the State, as mentioned in the AP Reorganisation Act, is also pending,” he said, and added that they also sought AP’s share in Centre’s `20 lakh crore stimulus package to address the situation arisen due to Covid-19.

“The Centre’s help to tide over crisis of MSMEs, free ration and aid to farmers among others will be based on population. Like other States, we will also get our share,” the finance minister pointed out.

Later, in his meeting with Minister of Jal Shakti Gajendra Singh Shekhawat, Buggana underlined the need to set up a ‘Revolving Fund’ to reimburse the money spent by the State government on Polavaram project.
“We requested the Union Minister to reimburse the funds spent by the state government. In order to avoid delay, we suggested setting up of a revolving fund,” he said.

If NABARD is authorised to provide direct line of credit as a revolving fund to the Polavaram Project Authority,  it would be easy to get the funds from it, he explained. He also urged the Union Minister to authorise  NABARD for raising `15,000 crore, required for the Polavaram project works in the current financial year.

The minister also discussed other irrigation projects in the State, including Uttarandhra Sujala Sravathi, with Shekawat.

In his meeting with Minister of State for Home affairs G Kishan Reddy, Buggana requested him to ensure that the provisions in the AP Reorganisation Act are implemented.  Later, in his meeting with Niti Ayog CEO Amitabh Kant and advisor  Avinash Mishra, he requested them to allocate funds for various projects in the State. 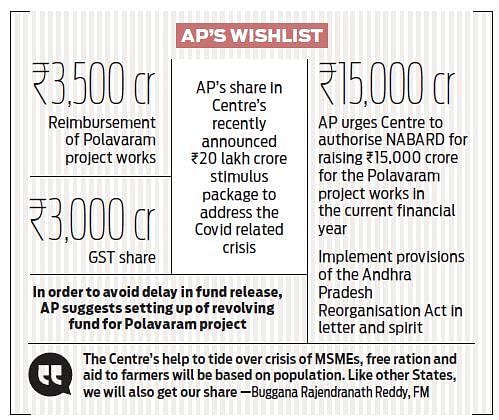