The officials said availability of land and necessary transmission infrastructure were two critical aspects for the establishment of UMREPPs.

VIJAYAWADA: After unveiling the Andhra Pradesh Renewable Energy Export Policy, 2020, to promote the establishment of renewable power plants in the State, the Energy department has accelerated efforts to start the development of Ultra Mega Renewable Energy Power Plants (UMREPPs).

While necessary land has been already been identified for 16,000 Megawatt (MW) to 20,000 MW in four locations of Rayalaseema districts in the first phase, the department has written to the Central Electricity Authority (CEA) and Power Grid Corporation of India Ltd (PGCIL) requesting the establishment of transmission system for the proposed parks.

The officials said availability of land and necessary transmission infrastructure were two critical aspects for the establishment of UMREPPs.

“We have identified about one lakh acres of land in Kadapa and Kurnool districts with a proposal to establish four UMREPPs in four locations of these districts. We have asked the CEA and PGCIL for the establishment of necessary transmission systems for evacuation of the power. We have already received in-principal approval for two central transmission utility (CTU) sub-stations. So we wrote to them to expedite the process for four sub-stations on priority basis,” New and Renewable Energy Development Corporation of Andhra Pradesh Ltd (NREDCAP) Vice Chairperson and MD S Ramana Reddy said.

A letter in this regard has been sent by Energy Secretary N Srikant to the CEA on Wednesday. The NREDCAP Vice Chairperson and MD also sent a communication on the same lines to PGCIL on July 16.The four locations in which the UMREPPs have been proposed are: Kolimigundla of Kurnool district, Puttaparthi and Kalyandurg of Anantapur district, and Badvel of Kadapa district. The government identified lands to develop the four as ‘Renewable Energy Hubs’ with 4,000 MW to 5,000MW capacity of UMREPPs in each location.

As the electricity from these plants will be exported, the presence of CTU sub-stations is necessary. For the record, the government has set an ambitious target to establish 120 Gigawatts (GW) (1.2 lakh MW) renewable power plants in five years by using about five lakh acres of land according to the export policy announced two weeks ago.

The officials revealed that Solar Energy Corporation of India (SECI) Ltd and NTPC have informed the State officials that they were ready to partner with Andhra Pradesh to develop transmission system for 8,000 MW and 5,000 MW respectively. The 8,000 MW planned by SECI would be in Kurnool (4,500 MW) and Anantapur (3,500 MW) districts.

“So, considering the availability of land, huge potential for solar power in our state coupled with our renewable energy export policy, and expression of interest by SECI and NTPC, we requested the establishment of transmission system of 765/400/220 KV capacity on priority basis. Once they are approved, we can simultaneously take up the works to commission the power plants, and also develop the transmission system,” Ramana Reddy explained. 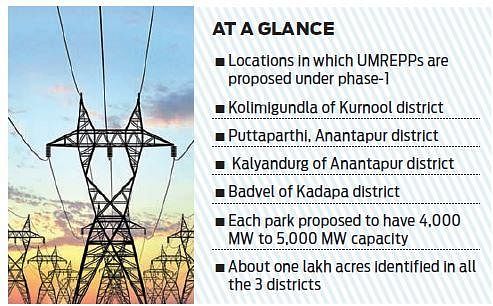