No train travel within Andhra Pradesh, but people from outside can arrive

14-day home quarantine for those who arrive; institutional quarantine if from high-risk places

VIJAYAWADA:  Train travel within Andhra Pradesh has been restricted “until further advice”, the South Central Railway announced late Sunday night. People who booked tickets with boarding and de-boarding stations in the state are advised to cancel them to get a full refund, it added. However, trains from other states will arrive in Andhra Pradesh, and the health department, earlier in the day, issued guidelines to ensure passengers on these trains don’t cause the number of Covid-19 cases to spike. As per these guidelines, passengers will have to be quarantined at home for 14 days on arrival, and their throat swabs will be collected for testing at railway stations.

Those who arrive from Maharashtra, Gujarat, Rajasthan, Madhya Pradesh, Delhi and Chennai will have to spend seven days in institutional quarantine followed by seven days of being quarantined at home after they reach their destinations in Andhra Pradesh. However, passengers above the age of 60 or below 10, and those who are pregnant, lactating or terminally ill may spend the entire 14 days quarantined at home.

Government officials and businesspersons travelling for work, and medical professionals won’t have to be quarantined if they produce a Covid-19 negative certificate issued by an ICMR-recognised laboratory within the three days before their journey. 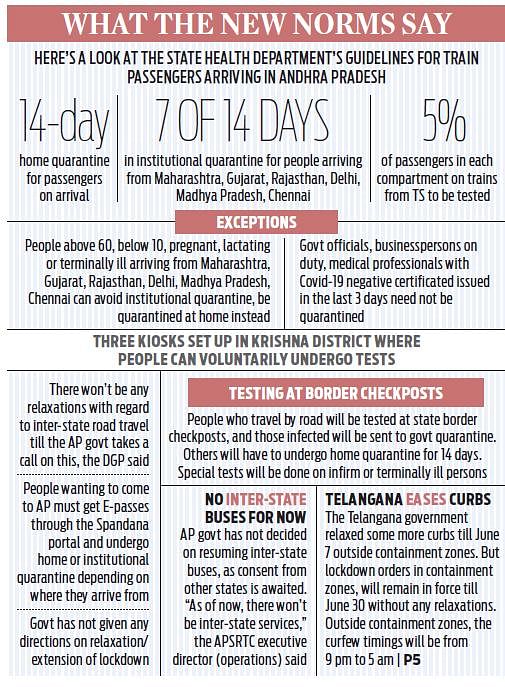 On trains originating in Telangana, five per cent of passengers in each compartment will be tested at random to ascertain the prevalence of Covid-19. “After observing the pattern of positivity for a week, the sampling may be modified,” Special Chief Secretary (Health) KS Jawahar Reddy said. Data of all passengers coming to the state will be recorded on the migrant movement app, and their home quarantine will be monitored. Instructions to this effect were issued to district collectors and superintendents of police. Further, it was decided that all passengers will be thermally screened once they get off trains, and those who are asymptomatic will be allowed to go home. Arrangements are being made at railway stations, and special teams will be positioned. The Krishna district administration too has taken up additional precautionary measures.