Devotees to be allowed in limited numbers, screening must for all.

VIJAYAWADA: Darshan in all temples in Andhra Pradesh, except those located in containment zones, will resume on June 10 after a trial run on June 8 and 9, adhering to the Covid-19 safety protocol issued by the Centre and the state government. There will be no offering of theertham and blessing with satari. Sri Venkateswara temple at Tirumala has already announced that it will reopen for darshan on June 11 after a three-day trial run.

Announcing this at a media conference here on Saturday, Minister for Endowments Vellampalli Srinivasa Rao said after nearly two months, with the Centre relaxing the nationwide lockdown norms and allowing reopening of temples and other religious places, the state government has issued guidelines to all temples for darshan. 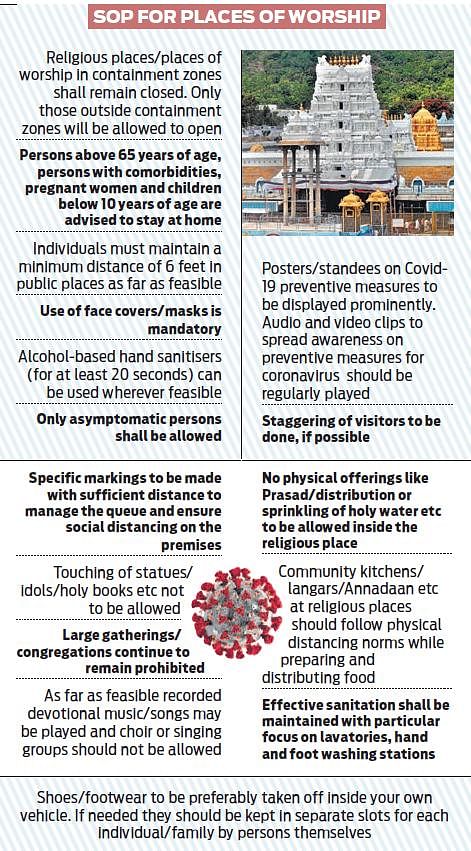 “Only people without symptoms after thorough screening will be allowed to have darshan in temples. Only a limited number of devotees will be allowed. For darshan, devotees need to book time slots online in advance,” he said and added that as directed by the governments, people above 65 years and below 10 years, pregnant women, those suffering from comorbidities will not be allowed for darshan.

Wearing mask, cleaning hands with soap and sanitiser and maintaining physical distancing of 6 feet are mandatory. “We request devotees to self-regulate and take all precautionary measures. Everyone will be screened with thermal scanners. We request all devotees to download Aarogya Setu App on their phones.”  In Durga temple in Vijayawada, 300 devotees will be allowed for darshan per hour and markings in queue lines have been made to ensure that devotees maintain social distance. There will be no Antharalaya darshan in any temple, he added. Endowments Commissioner P Arjun Rao and Andhra Pradesh Brahmin Corporation Chairman Malladi Vishnu were also present at the news conference.

Now we are on Telegram too. Follow us for updates
TAGS
COVID 19 COVID pandemic Andhra Temples