As part of the new policy, sand  is being sold through the Andhra Pradesh Mineral Development Corporation to ensure transparency.

VIJAYAWADA: Every measure is being taken to ensure easy availability of sand to people for their needs and that too in a transparent manner, said Principal Secretary (Mines) Gopal Krishna Dwivedi.

In a press release issued on Sunday, he said Chief Minister YS Jagan Mohan Reddy at a review meeting on June 5, had taken several key decisions to see that illegal sand mining and transportation is checked effectively and sand is door delivered to people as per the new policy.

As part of the new policy, sand  is being sold through the Andhra Pradesh Mineral Development Corporation (APMDC) to ensure transparency.

“For the first time in the country, sand is being sold online and door delivered and AP has set a new precedent in this regard,” he said. Sand smugglers will be sentenced to 2 years in jail, besides imposing a fine of Rs 2 lakh.

Dwivedi said that while booking sand online, those with high speed internet were having the advantage of completing the transaction in a matter of minutes soon after the opening of the portal.

“After observing that all people were not able to get sand easily, the government has decided to involve village and ward secretariats in booking of sand. Once an official announcement is made, sand can be easily booked by people through village/ward secretariats,” he said.

He opined that the involvement of village/ward secretariats in sand booking will help get accurate information as to whether it is booked and used for genuine purpose or not. It will help put an end to black marketing of sand, he added.  Another important decision taken is to allow mining of sand in streams and rivulets for local use free of cost and transportation of such mined sand on bullock carts. “Earlier, only in the streams of Order 1 to 3, free sand mining and transportation was permitted. Now, it has been decided to allow mining of sand in streams of Order 4 and 5 also. 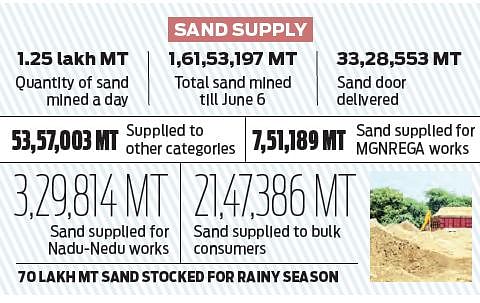 All one has to do is to get his name registered in the panchayat office, mentioning his sand requirement. People living in 5 km radius of the stream can avail of the facility,” he explained.

Sand mining will be intensified after the lockdown is lifted. At present, on an average 1.25 lakh metric tonnes of sand is being excavated a day. Till June 6, the total quantity of sand mined in the State stood at 1,61,53,197 metric tonnes. Out of the total, 33,28,553 tonnes of sand was door delivered and 53,57,003 tonnes was provided to other categories of consumers.

On the other hand, 7,51,189 tonnes of sand was supplied for MGNREGA works and 3,29,814 tonnes for Nadu-Nedu works. Under the bulk booking, 21,47,386 tonnes was supplied to consumers.  “On the directions of the Chief Minister, 70 lakh metric tonnes of sand has been stocked for use during the rainy season,” he said.

Now we are on Telegram too. Follow us for updates
TAGS
Sand Mafia Gopal Krishna Dwivedi