CM urges people to voluntarily get themselves tested; 216 new patients; 64 discharged from hosps

VIJAYAWADA:  COvid-19 tally breached the 5,000-mark in Andhra Pradesh on Tuesday. After 216 persons, including 69 hailing from other states, were reported to be carriers of the virus, the state’s count reached 5,029. Two more deaths — one each in Krishna and Anantapur districts — took the toll to 77. In Visakhapatnam, the cumulative cases crossed the 200-mark after 13 were reported to be positive in the past 24 hours.

According to the media bulletin released by the State Command Control Room on Tuesday, 15,085 samples were tested between Monday 9 am and Tuesday 9 am. Of them, 147 from Andhra Pradesh and 69 from other states tested positive. 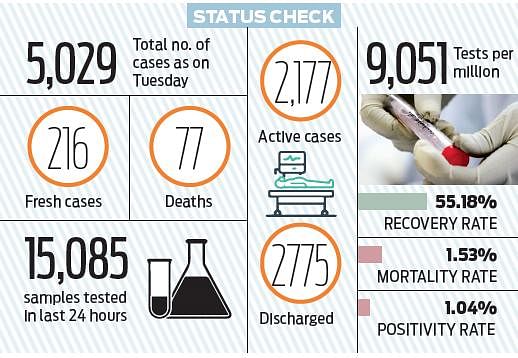 In Chittoor, one of the nine fresh infectees is an employee of the famous Srikalahasthi temple. This prompted the authorities to postpone resumption of darshan at the temple by two more weeks. In Guntur, seven new cases were registered, pushing the district tally to 568. On the brighter side, 64 more Covid-19 patients were discharged from hospitals, taking the total number of discharged persons to 2,775. However, due to the spike in cases in the last couple of days, active cases in the state stood at 2,177 as on Tuesday.

Meanwhile, Chief Minister YS Jagan Mohan Reddy emphasized the need for creating awareness on coronavirus among the people, and to not be afraid as the recovery rate is high and mortality rate in the state is just over one per cent. During a video conference with district collectors as part of Spandana on Tuesday, he directed the officials to educate people the measures to be taken to remove certain stigmas. The chief minister instructed officials of the Health Department and all district collectors to focus on creating awareness among the people so that they get themselves voluntarily tested.

“People should not have any stigma related to Covid-19 tests. If they don’t come forward and get treated, it may eventually lead to their death, increasing the mortality rate. So far, test positivity rate in the state is only one per cent, while it is six per cent in the country. Nearly 85 per cent of the cases can be cured by simple medications and staying at home,” he said.

The CM also acknowledged the service of village volunteers, Asha workers, doctors, lab technicians and sanitation workers in the fight against the pandemic. With regard to the Nadu-Nedu development activity, Jagan instructed joint collectors to monitor the works on a daily basis and identify lands suitable for establishment of 15 new medical colleges.

Now we are on Telegram too. Follow us for updates
TAGS
COVID-19