The Cabinet Sub Committee, which looked into irregularities in the schemes of the previous government, submitted its report to the Cabinet recommending a CBI probe

VIJAYAWADA:  In yet another jolt to the TDP, the state Cabinet on Thursday decided to order a CBI probe into the alleged irregularities in the tendering process and execution of the AP Fibernet (AP Fiber Grid) project by the previous TDP government. It has also approved a CBI probe into the tendering and procurement of supplies distributed to the poor under the ‘Chandranna Sankranthi’, ‘Ramzan Thofa’ and ‘Christmas Kanuka’ schemes by the previous TDP government. 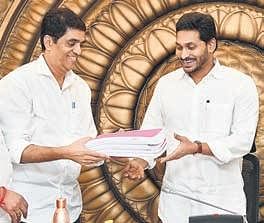 This is the second CBI probe sought by the State government against alleged corruption by the previous TDP regime. Earlier, it had ordered investigation by the premier agency into alleged irregularities in the Amaravathi capital project.

The Cabinet, which met under the chairmanship of Chief Minister YS Jagan Mohan Reddy, took the decision to seek a CBI probe into the erstwhile TDP government’s Fibernet project and festival gift hampers based on a report submitted by the Cabinet sub-committee. Briefing the media after the meeting, Information and Public Relations Minister Perni Venkataramaiah (Nani) said the sub-committee had unearthed irregularities in the tendering and execution of the Central government-sponsored Fibernet project.

“The then government handed over the project to Vemuri Harikrishna, his (Chandrababu Naidu) close aide, who was accused of stealing EVMs. It (the then government) awarded the tender to Tera Soft, even though it was not the lowest bidder and did not have the eligibility to execute the project,” Nani said.

“Similarly, even as a Central agency came forward to monitor the execution of the project and quoted the lowest bid, the then government preferred Tera Soft for monitoring purposes also,” Nani added.
The CSC also found irregularities in the procurement of Set Top Boxes for the project. “Instead of giving the contract to the lowest bidder, the then government asked four companies including Tera Soft to supply the STBs and preferred to procure the boxes from Tera Soft alone,” Nani said adding that as per the sub-committee, the corruption in this entire episode runs up to Rs 200 crore.

“This was done intentionally for the benefit of Tera Soft and through them, the State Cabinet ministers, Chief Minister and those owning the company,” he alleged. Similarly, the CSC also detected ‘glaring’ irregularities in the tendering process and procurement in the ‘Chandranna Sankranthi,’ ‘Ramzan Thofa’ and ‘Christmas Kanuka’ schemes. “The CSC found irregularities to the tune of `150 crore in the procurement of supplies for the three schemes. There are glaring irregularities in the tendering process too,’’ Nani said, disclosing that as such, the Cabinet has resolved to hand over the probe into these two aspects to the CBI.

The TDP reacted sharply to the Cabinet move. The Telugu Desam Legislature Party at its strategy meeting discussed at length the government’s decision. The TDLP leaders claimed the YSRC government faced stiff opposition from the people for stopping the gifts given to them on the occasion of festivals and to cover up this, it was raising the issue of corruption in the schemes. “The government is unable to use the project properly and is slinging mud on the TDP government,” TDLP alleged.

What did Cabinet Sub-Committee find?

Now we are on Telegram too. Follow us for updates
TAGS
Jagan Mohan Reddy chandrababu naidu CBI