The famous Kanipakam temple in Chittoor district and Vizag’s King George Hospital morgue were shut after staff working there were reported to be infected.

VIJAYAWADA: A record 304 cases were added to the Covid-19 tally in Andhra Pradesh on Monday, taking the state’s aggregate to 6,456. Two more casualties, in Anantapur and Kurnool, took the virus toll in the state to 86.

According to a media bulletin issued by the State Command Control Room, 15,173 samples were tested in the 24 hours ending Monday 9 am, of which 246 tested positive for the virus. Of the new infectees, 52 returned from other states, and six from abroad.

The famous Kanipakam temple in Chittoor district and Vizag’s King George Hospital morgue were shut after staff working there were reported to be infected.

After a home guard posted at the temple tested positive, authorities were forced to close the temple for two days.

Similarly, a postgraduate doctor attached with the forensic medical wing tested positive, forcing the hospital to close the morgue and make alternative arrangements for post-mortem examinations.

Meanwhile, 47 more patients were discharged from Covid hospitals across the state. Similarly, 22 of those who returned from other states were discharged, taking the total number of recoveries to 3,385.

Among those who recovered and were discharged on Monday was a two-month-old girl. She was discharged from the Kurnool Government General Hospital.

The infant is from Ternakal village in Devanakonda mandal of Kurnool district and a primary contact of her parents, who are migrant workers who returned from Mumbai last month. Her parents were discharged from the Kurnool GGH two days ago.

The baby was kept in a special isolation ward for 14-days along with her mother after she tested positive.

Among those who recovered and were discharged on Monday was a two-month-old girl. She was discharged from the Kurnool Govt General Hospital 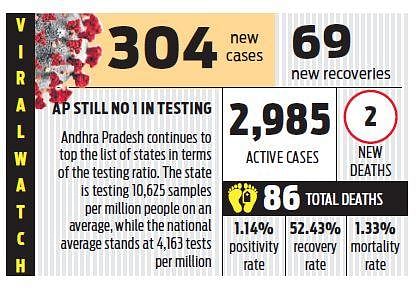 Now we are on Telegram too. Follow us for updates
TAGS
coronavirus COVID 19 Andhra Pradesh