Buggana rolled out a budget, with increased allocations for the government’s flagship welfare schemes — the Navaratnalu — while bringing down expenditure for several other heads.

VIJAYAWADA: Faced with an unprecedented economic slump, Finance Minister Buggana Rajendranath Reddy on Tuesday presented a Rs 2.24 lakh crore budget for 2020-21 — 1.4 per cent less than the last fiscal — with the major thrust being on welfare schemes, as expected.

In his own words, the reduced share of the State in the divisible pool of Central taxes and the precipitous decline in revenue realisation due to the COVID-19-induced lockdown have made things difficult so much so that “the adverse conditions would have broken the will of any other government.” Crediting CM YS Jagan Mohan Reddy for being firm in the face of adversity, Buggana rolled out a budget, with increased allocations for the government’s flagship welfare schemes — the Navaratnalu — while bringing down expenditure for several other heads. 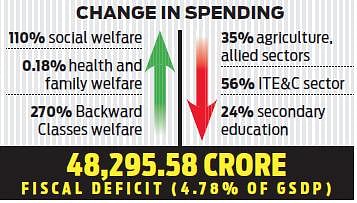 Kapus’ welfare too was given its due with an allocation of Rs 2,847 crore, a 42.35 per cent growth over the revised estimates last fiscal. The direct cash transfer benefit schemes like Amma Vodi (Rs 6,000 crore), YSR Pension Kanuka (Rs 16,000 crore), Jagananna Vidya Deevena (Rs 3,009 crore) among others received a budgetary allocation of Rs 37,659 crore. For SC and ST welfare, the allocations were increased to Rs 7,525 crore and Rs 1,840 crore respectively.

For health and family welfare, a sum of Rs 11,419 crore has been allocated -- a marginal increase of 0.18 per cent over last fiscal but substantially over Rs 4,000 crores over the revised estimates. But given the COVID-19 situation, one would have hoped further increase in allocation for this sector. However, the allocation for infrastructure and investment went up by 22 per cent. For Agriculture and allied sectors too, the budgetary allocation was down by 35 per cent. Similarly, higher and secondary education received cuts over last fiscal estimates by 12 and 24 % respectively.