However, representatives of the Chamber of Commerce and other industry bodies said though pending incentives amount to Rs 4,500 crore, the government allocated only Rs 905 crore.

VIJAYAWADA: Though the allocations made to industries, infrastructure and investment sectors in the state budget for 2020-21 appear low, officials observe that the government’s commitment to industrial growth is evident with the developments in the last one week.

Apart from Rs 2,705.14 crore (20.82 per cent less than the allocation in 2019-20) to the Industries and Commerce department, the government earmarked Rs 696.62 crore (22.29 per cent more than the allocation in 2019-20) for infrastructure and investment, Rs 856.64 crore for skill development and Rs 197.37 crore (56.48 per cent less than last fiscal) for IT in the budget.Apart from entering into an agreement with GMR Airport Limited for the development of Bhogapuram airport, the government has issued orders for completion of Ramayapatnam phase-I works.

In the budget, Rs 250 crore was allocated for Kadapa Steel Plant and the same is expected to be increased with Chief Minister YS Jagan Mohan Reddy giving directions to sanction Rs 500 crore for the steel plant towards equity.

However, representatives of the Chamber of Commerce and other industry bodies said though pending incentives amount to Rs 4,500 crore, the government allocated only Rs 905 crore. They opine that the allocation made to the infrastructure sector is very low.

“We are having two industrial corridors as well as industrial nodes in the State and the funds earmarked for infrastructure development are not sufficient. The government will have to focus on infrastructure development if it is keen on attracting investors to the state,” a representative of Chamber of Commerce said, adding that the government may come up with a strategy in this regard through the new industrial policy,  expected to be rolled out by June-end. Stating that the budget laid equal emphasis on development and welfare, FAPCCI president CV Atchyut Rao, however, felt that the government should have announced a few more measures to promote and attract private investments, which help generate more employment in the State. 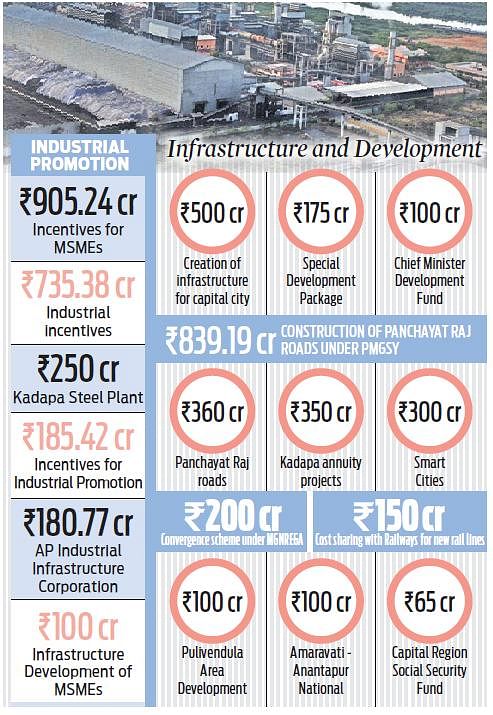 Now we are on Telegram too. Follow us for updates
TAGS
Chamber of Commerce YS Jagan Mohan Reddy