The Narsipatnam police have registered cases under various sections of the IPC against former minister and senior TDP senior leader Ch Ayyanna Patrudu.

VISAKHAPATNAM:  The Narsipatnam police have registered cases under various sections of the IPC against former minister and senior TDP senior leader Ch Ayyanna Patrudu. Police said cases under IPC sections 354-A (4), 500, 504, 505 (1) (b), 505 (2), 506 and 509 were filed against Ayyanna on charges of hurling abuses against municipal commissioner Krishna Veni at her office on June 15. 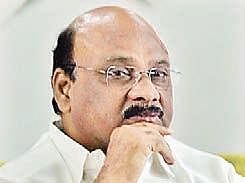 Ayyanna along with his supporters staged a dharna at the municipal office on June 15 in protest against removal of the portrait of his grand father Latcha Patrudu, who had worked for the development of Narsipatnam.

Though officials clarified that Latcha Patraudu’s portrait was removed as they were painting the building, the former minister continued the dharna and reportedly warned the commissioner of serious consequences if she failed to restore portrait in the municipal office. ASP Tuni Sinha said cases were filed following a complaint lodged by the municipal commissioner with Narsipatnam police. He said the FIR was registered after seeking a legal opinion. Action will be taken based on the investigation report, he said.

Now we are on Telegram too. Follow us for updates
TAGS
Ayyanna Patrudu