PPCs to be shut in 3 days

All 44 paddy procurement centres (PPCs) in Prakasam will be closed from Saturday. 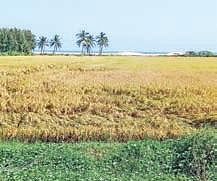 ONGOLE: All 44 paddy procurement centres (PPCs) in Prakasam will be closed from Saturday. As such, the district authorities have appealed to farmers to sell their leftover stock at the PPCs so as to benefit from the minimum support price.

Now we are on Telegram too. Follow us for updates
TAGS
paddy procurement centres