It goes on to say that the CM was accused of ensuring supply of polypropylene bags for PDS rice distribution from his own Polymer Company and without tender process. 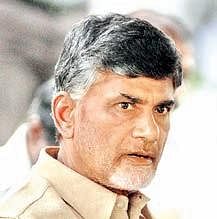 In the notices served by State Public Prosecutor, High Court of Andhra Pradesh, K Srinivas Reddy, the government took objection to news items on statements given by Naidu, on extension of lease to M/s Saraswati Power in Dachapalle, Guntur district, and supply of bags for PDS rice distribution. Srinivas Reddy recalled one news item had said it was a shame on the part of the chief minister to get the lease extended to his own company. “... the whole crux of the statement is that getting the extension of 50 years lease is shameful,” the notice points out, adding that as per an amendment Act brought by the Centre, all mining leases granted before the commencement of the Mines and Minerals (Deve l opment and Regulations) Amendment Act 2015 shall be deemed to have been granted lease up to 50 years.

The notice says as per Sub Section 5, notwithstanding anything contained in Sub Sections, 2 to 4, the period of lease granted before the date of the commencement of Amendment Act 2015, where mineral is used for captive purpose, shall be deemed to have been extended up to a period ending on March 31, 2030 with effect from the date of expiry of the period of renewal last made or till the completion of the renewal period if any or for a period of 50 years from the date of grant of such lease whichever is later.

The notice says the TDP chief, knowing well that the lease is deemed to have been extended for a period of 50 years, falsely stated that the Chief Minister has brought shame by extending the lease for 50 years only to defame the Chief Minister. It further points out that Naidu himself, when he was the CM, issued GOs to 30 leases. Another defamation notice was also served on Naidu and a vernacular daily by Kona Sasisdhar, Commissioner and Ex-Officio Secretary, Consumer Affairs and Civil Supplies, for alleged defamatory comments against the Chief Minister.

It goes on to say that the CM was accused of ensuring supply of polypropylene bags for PDS rice distribution from his own Polymer Company and without tender process. The notice points out that no company owned by the CM was awarded the contract and procurement of bags for PDS rice distribution was done through e-procurement, reverse tendering process and with utmost transparency.

Now we are on Telegram too. Follow us for updates
TAGS
N Chandrababu Naidu