Of the 477 new cases, 439 are people who were in the state, while 34 returned from other states and four from abroad.

VIJAYAWADA: A record 24,451 samples were tested for coronavirus in Andhra Pradesh between Saturday and Sunday, and of them, 477 returned positive. In the same period, 152 Covid- 19 patients in the state recovered, and five died, taking the toll to 106. Three deaths were reported in Krishna district, and one each in Kurnool and Chittoor. With 36 casualties, Krishna has the most coronavirus deaths in the state, followed by Kurnool (34), Guntur (11), Anantapur (6), Chittoor and East Godavari (5 each), Nellore (4), Praksam (2), Srikakulam and Visakhapatnam (1 each).

Among the people who returned from other states and tested positive for the virus, 786 arrived from Maharashtra, followed by 319 from Tamil Nadu and 219 from Telangana. Among those who returned from abroad, 293 who arrived from Kuwait tested positive, followed by 10 from the UAE, seven from Qatar, five from Indonesia, four from Abu Dhabi, three each from Kazakhstan, South Africa and Bahrain, and one each from Oman and Sudan. 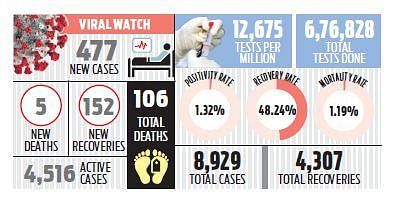 Now we are on Telegram too. Follow us for updates
TAGS
AP toll Andhra covid 19 COVID 19 coronavirus