The MMR is defined as the proportion of maternal deaths per one lakh live births.

VIJAYAWADA: The Maternal Mortality Ratio (MMR) in Andhra Pradesh is 74, much lower than the all-India average of 122, according to the latest Sample Registration System (SRS 2015-17). The MMR is defined as the proportion of maternal deaths per one lakh live births. In fact, the goal is to achieve less than 70 MMR.

According to the Socio-Economic Survey 2019-20 released by the State government, the Infant Mortality Rate (IMR) is 29, compared to the national average of 32, while Under-5 Mortality Rate (U-5MR) is 35, as against the national average of 37. In the last one year, continuing the measures initiated under the Centresponsored schemes, the State government has made efforts to address the health issues. The YSR Aarogyasri, YSR Kanti Velugu and improvement of the existing health schemes are seen as steps in the direction of achieving the goal of ‘Better Health for All’.

The objective of YSR Aarogyasri is to provide end-to-end cashless healthcare services to BPL families identified by the government in empanelled network hospitals for 2,059 (including 1,000 new) medical procedures with a financial limit of Rs 5 lakh per annum for each family. In 2019-20, 4,41,573 patients benefited under the scheme. A total of 130 hospitals in Hyderabad, Bengaluru and Chennai are empanelled to enable YSR Aarogyasri beneficiaries to avail the benefit in the three major cities. The 130 empanelled hospitals (Hyderabad - 72, Bengaluru - 35 and Chennai - 23) covering 716 super specialty procedures, treated 3,020 patients under YSR Aarogyasri from November 1, 2019 to March 31, 2020.

The government has also extended financial assistance to the patients who undergo surgeries under the YSR Aarogyasri scheme for the post-operation recovery period at the rate of Rs 225 per day, subject to a maximum of Rs 5,000 per month. From December 1, 2019 to March 31, 2020, as many as 1,05,702 patients have received post-operation sustenance allowance of Rs 72.93 crore. For provision of eye care to schoolchildren, the YSR Kanti Velugu scheme was launched. Under the first phase of the scheme, 95 per cent of beneficiaries have been examined for eye ailments and treated so far.

Several measures have also been initiated with respect to other chronic diseases. Under the National Programme for Prevention and Control of Cancer, Diabetes, Cardiovascular Diseases and Stroke (NPCDCS), 13 NCD Clinics are functioning in district hospitals. There are also 12 cardiac care units in all districts except Chittoor, which is under the PPP mode, besides 90 CHCs, NCD clinics.

Also for AIDS, the State has initiated measures, including provision of basic services such as free HIV/AIDS counselling, testing and also prevention of mother to child transmission through 1,936 centres (1,630 government, 196 private, 102 CBSTI NGOs and eight mobile). The report stated that there are three lakh people suffering from HIV in AP. Also, blood transfusion services a re prov i d e d through 145 storage centres, where blood is tested for HIV and o t h e r i n f e c t i o u s diseases. 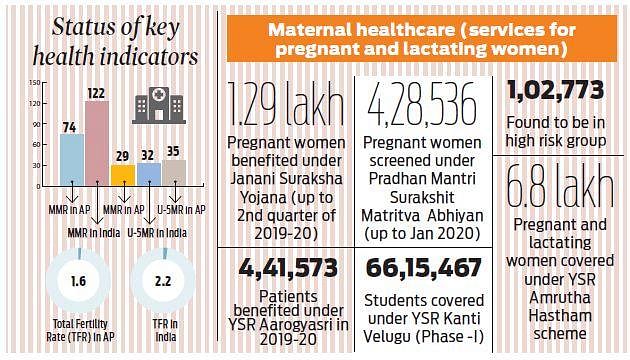 Now we are on Telegram too. Follow us for updates
TAGS
MMR Andhra Pradesh Andhra key indicators