Monsoon mood sets in over Andhra Pradesh, more showers on the way

VIJAYAWADA: Under the influence of the Southwest Monsoon, several parts of Krishna and Prakasam districts, some parts of West Godavari and Vizianagaram district received light to moderate rains since Saturday night, and the sky was mostly overcast in the rest of the state. According to Indian Meteorology Department (IMD) officials, the Southwest Monsoon has been active and normal in the state. 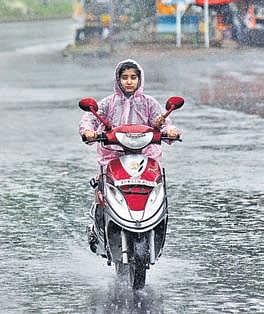 Though two days behind schedule, it covered the entire state in time. Thunderstorms and lightning are likely in isolated places over North Coastal Andhra Pradesh on Monday, and heavy rains are predicted in isolated places in the state on Thursday.

On Sunday, the sky opened up in Vijayawada in the morning, and the drizzle continued till late in the evening. The weather disappointed those who were keen on watching the solar eclipse.

The situation was no different in towns and villages of Krishna district. The district recorded 28.6 mm of rainfall at 8.30 am. The incessant drizzle caused water to stagnate on several roads in Vijayawada, and at some places, drains were clogged and overflowing. All three canals ribboning across the city carried flowing water again after nearly three weeks. Parts of West Godavari district received light to moderate rainfall since Saturday night. Chintalapudi received 4.4 cm of rainfall by Sunday morning.

In Prakasam district, half the mandals received scattered rain. In Venkatagiri, Gudur region of Nellore, intermittent drizzle was reported. However, in the rest of Nellore and Chittoor district, the weather was sunny. Kadapa, Anantapur and Kurnool district received light rainfall in isolated places. Vizianagaram district received scattered rains, with Gajapathinagaram receiving 4.6 cm of rainfall, followed by Bonapalle and Balajipeta.

Now we are on Telegram too. Follow us for updates
TAGS
Andhra monsoon Andhra Pradesh Monsoon