Speaking to the media in Rajamahendravaram, Arun Kumar, while referring to the State budget, made a mention of Finance Minister Buggana Rajendranath Reddy’s speech.

VIJAYAWADA: Former MP from Rajamahendravaram Undavalli Arun Kumar on Wednesday had a piece of advice for Chief Minister YS Jagan Mohan Reddy. The outspoken leader advised the Chief Minister to emulate Nelson Mandela, in embracing Opposition leaders rather than targeting them.

Speaking to the media in Rajamahendravaram, Arun Kumar, while referring to the State budget, made a mention of Finance Minister Buggana Rajendranath Reddy’s speech. Rajendranath had reportedly asked Jagan how could they fulfil their poll promises when the revenues had fallen.

“Jagan told me to remember Nelson Mandela. A man with commitment can overcome any hurdles,’’ Arun Kumar, quoting from Rajendranath Reddy’s speech, said adding that the words were mentioned in bold letters in the Budget speech. Arun Kumar said that the anti-apartheid leader, during his 27-year prison term, was put to severe hardship.

“Mandela was made to drink urine of a jailor. Mandela, who drew inspiration from Mahatma Gandhi, went on to become the President of the country,’’ the former MP recalled. 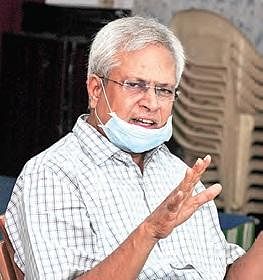 After becoming President, Mandela along with his security personnel, once went to a hotel , where he found an old man sitting in a corner.

“He immediately asked his security personnel to bring him to his table. Mandela offered him food and exchanged pleasantries with the man, who was shivering all the time.

Later, when the man went off, Mandela told his security personnel he was one of the jailors who forced him to drink urine.

Mandela told the security staff that the person was shivering not out of fever, but fear,’’ Arun Kumar explained, adding that Mandela told them that he became President not to take revenge against those who were cruel to him.

“Mandela conveyed a message that as the President, all whites and blacks were equal to him,’’ he added. Arun Kumar wanted Jagan to take the message from this episode in the life of Nelson Mandela.

“You came to power not to create trouble or eliminate your opponents. You should only look at the welfare of the people who voted for you, not at your opponents. You should focus on the poor who voted you to power believing that your Navaratnalu will alleviate their suffering,’’ the former MP said, adding that Jagan had to forget all those who created hurdles for him in the past.

“Every politician should take this incident in Mandela’s life as an inspiration,’’ he said. Referring to the controversy surrounding the State Election Commissioner, Arun Kumar said that Nimmagadda Ramesh Kumar postponed the elections without consulting the government against the existing norms.

“You (Jagan) should have spoken to Ramesh Kumar directly. Finally, his decision to postpone elections proved correct as the entire economic activity has come to a standstill. But, your action of appointing another person and the subsequent acts have now become a bigger mistake than that of Ramesh Kumar. Why are you confronting the SEC and courts? Focus on people,’’ Arun Kumar advised.

The former MP said he would seek a probe on the East Godavari district administration’s decision to procure lands at a higher price for allotting house sites to the poor. Referring to the high prices of liquor in the State, Arun Kumar said brands that are not known anywhere in the country are being sold in the State.

“If you want to sell liquor at higher prices to dissuade people from consuming alcohol, make available all the brands at higher prices. Why are you promoting only local brands?’’ he questioned.

Now we are on Telegram too. Follow us for updates
TAGS
Arun Kumar YS Jagan Mohan Reddy Nelson Mandela