Pattas to be given to 30 lakh beneficiaries on July 8, Indo-Swiss tech for construction of houses in AP

The housing project, which will be implemented in two phases, will incur an expenditure of Rs 87,900 crore.

VIJAYAWADA: Nothing that ‘Navaratnalu- Pedalandariki Illu’ (housing for poor) initiative was perhaps the biggest housing project in the country, Principal Secretary (Housing) Ajay Jain said house pattas have been scheduled to be given to almost 30 lakh beneficiaries on July 8. The housing project, which will be implemented in two phases, will incur an expenditure of Rs 87,900 crore, he explained. Addressing a webinar organised by the Union Housing Ministry on Thursday, Ajay Jain said a model house, which is under construction at Tadepalli of Guntur district, will be readied by June 30.

In the first phase of construction, scheduled to be launched on August 26, 15 lakh houses will be taken up. He added that the government was going to spend Rs 2.5 lakh for each house, totalling Rs 75,000 crore. “In addition, the State government will be spending another Rs 6,500 crore to issue house pattas and Rs 6,400 core for providing electricity and water infrastructure for the houses. With this, the total expenditure for the project is estimated around Rs 87,900 crore. Land leveling, approach roads and internal roads have already been taken up by through MGNREGS g rant,” he elaborated.

The principal secretary said the houses would be incorporated with all the energy-efficient design strategies, thus complying with the Eco-Niwas Samhita (ECBC Residential) code. An MoU will be signed by the Energy department, Housing department and Indo- Swiss Building Energy Efficiency Project (BEEP)/Bureau of Energy Efficiency (BEE) for implementing the ECBC residential code in the 30 lakh houses.

The BEE has come forward to implement BEEP in the housing project with the help of Federal Department of Foreign Affairs (FDFA) of the Swiss Confederation and assistance of Andhra Pradesh State Energy Conservation Mission (APSECM). Energy secretary Srikant Nagulapalli thanked BEE director general Abhay Bhakre and asserted it was a privilege for AP to be one among the three States picked for the implementation of the energy conservation building code in the country. 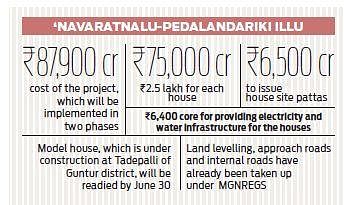 Now we are on Telegram too. Follow us for updates
TAGS
Navaratnalu Pedalandariki Illu Ajay Jain AP housing project