VIJAYAWADA: The COVID-19 tally in Andhra Pradesh reached 11,489 on Friday, with 605 of the 22,305 samples tested returning positive for coronavirus in the 24 hours ending at 10 am. This is the highest number of cases reported in a single day in the state so far. Meanwhile, 191 patients recovered and were discharged from hospitals, while 10 died.

The state now has 6,147 known active cases, as 5,196 of the 11,489 infectees recovered and 146 succumbed to the virus. Of the 10 new deaths, four each were reported in Krishna and Kurnool, and one each in Guntur and Visakhapatnam. 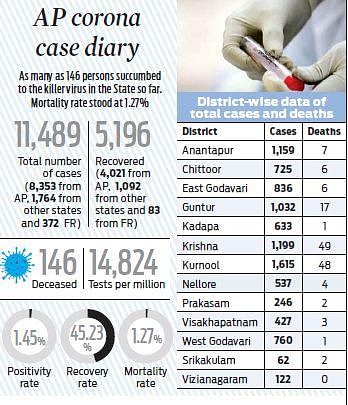 Now we are on Telegram too. Follow us for updates
TAGS
COVID 19 Coronavirus Coronavirus Pandemic