When questioned, he reportedly told the Task Force that he was sent to Vizag by his shop owner. 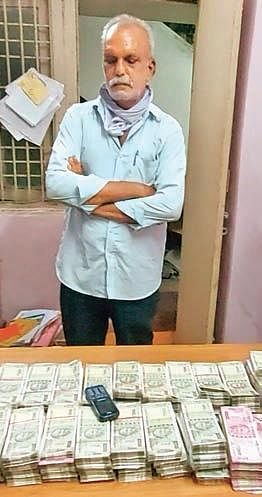 VISAKHAPATNAM: The Task Force police busted a hawala racket by arresting one person at Dwaraka bus station in the city on Saturday night. A sum of Rs  50.38 lakh was seized from him. On receipt of information about the suspicious movement of a person, a Task Force team, led by ACP Trinadh, reached the bus station and took him into custody. He was identified as G Narasimha Rao, a clerk in a jewellery shop at Narasapuram in West Godavari district.

When questioned, he reportedly told the Task Force that he was sent to Vizag by his shop owner. He failed to show any valid documents pertaining to the cash he was carrying. The Task Force, which found a secret code in his mobile phone, suspect that the money he was carrying being illegally diverted through hawala channel. The arrested, along with the seized cash, was handed over to Two Town police for further investigation. A case under Sections 41 and 102 of IPC was registered against him.

Now we are on Telegram too. Follow us for updates
TAGS
hawala racket