MSMEs to get 2nd tranche of ReSTART today

VIJAYAWADA: AS part of its efforts to revive Micro, Small and Medium Enterprises (MSMEs) in the State, the YS Jagan Mohan Reddy government will release the second tranche of Rs 512.35 crore under its ReSTART package on Monday, for payment of all sanctioned and outstanding incentives to the units. The State government had announced the Rs 1,100 crore Re- START package to bail the MSMEs out of lockdown crisis. The package includes incentives to the tune of Rs 827.5 crore kept pending by the previous TDP government since 2014-15. The ReSTART package has Rs 905 crore to clear the pending incentives to 7,717 MSME units. The first tranche of Rs 450.27 crore to the MSMEs was released by the Chief Minister on May 22.

As many as 2,435 MSME units (pertaining to 4,900 claims) belonging to SC/ST entrepreneurs will be benefitted with the release of the second tranche of pending incentives. Additional incentives to the tune of Rs 58.97 crore will also be released to 128 food processing units (163 claims) under the second tranche. According to officials, around 98,000 MSMEs are providing employment to about 10 lakh people. Apart from payment of all sanctioned and outstanding incentives to the MSMEs, the package includes waiver of three months fixed/demand power charges of MSMEs, deferment of minimum power demand charges of large and mega units for three months and working capital loans for MSMEs along with preferential market access to them. The State government had decided to waive off the fixed/ demand power charges of MSMEs for three months (April to June) and for this, the government is spending Rs 188 crore.

Similarly, it had decided to defer payment of fixed/demand power charges of all large and mega industries for three months (from April to June) without interest or penal charge and for this, the government is spending about Rs 17 crore. The government will also set up a Rs 200 crore working capital fund to provide loans in the range of Rs 2 lakh to Rs 10 lakh to the MSMEs. These loans will be given at a low interest rate of six to eight per cent and with longer repayment period of three years, including moratorium through the AP State Finance Corporation. To provide market to the products of the MSMEs, the government is facilitating Preferential Market Access.

Under this, all government departments, local bodies, statutory bodies, development authorities, bodies created through executive orders, companies, corporations, special purpose vehicles, societies, trusts and other PSUs will purchase products of the MSMEs. “Twenty-five per cent of annual requirement of all goods or services will be procured from State MSMEs and of the 25 per cent, four per cent subtarget is reserved for SC/ST and three per cent sub-target for women, to give special support for these categories,’’ officials said. 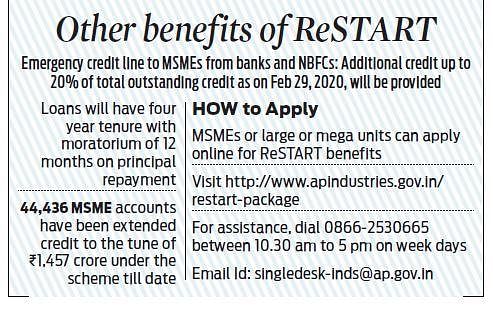 Now we are on Telegram too. Follow us for updates
TAGS
MSME