Out of the 45 new cases, four cases, two each in Chittoor and Nellore, were those people who visited the Koyambedu wholesaler market in Chennai.

VIJAYAWADA: COVID-19 count in Andhra Pradesh went up to 2,605 with another 45 new positive cases reported in the State in the last 24 hours ending 9 am on Thursday. One death was reported in Kurnool, taking the COVID-19 toll in the State to 54. As per the media bulletin issued by the State Command Control Room (Health) on Thursday morning, out of the 45 new cases, four cases — two each in Chittoor and Nellore — were linked to Koyambedu wholesaler market in Chennai. 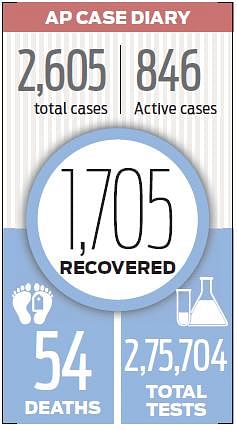 In the 24 hours, 8,092 samples were tested. Another 41 COVID-19 patients were discharged across the State during the period, taking the cumulative recoveries to 1,705, including 25 of other States.  The total number of active cases in the State is 846. In East Godavari district, two COVID-19 cases were reported, one each in G Mamidada in Pedapudi mandal and Suryanagar in Amalapuram. One of them died on Thursday and it might be reported on Friday bulletin issued by the health department. It is the first COVID-19 casualty in East Godavari.

According to East Godavari DMHO Dr Satya Susheela, the 60-year-old was a hotel employee in G Maidada and admitted to Kakinada GGH on Wednesday. Later, he tested positive. However, even before the test results came, he died. His family members were tested and results were negative. Now entire Mamidada has been declared a containment zone.

Another case was a 23-year-old youth, who returned to Amalapuram from Mumbai two days ago and voluntarily got himself tested with Trunat and when the result came positive, the samples were sent for VRDL, which confirmed that youth contracted the virus. Though samples of 15 primary contacts were tested, the results were negative. Meanwhile, six more positive cases recorded in Guntur district on Thursday, taking the district count 432.