Since dawn, passengers in limited numbers arrived at the Pandit Nehru Bus Station (PNBS) in Vijayawada to reach their hometown and workplaces.

VIJAYAWADA:  APSRTC buses rolled out of the depots after a gap of 58 days and received good response from passengers in some districts, while not many opted for the services in some other places. The RTC resumed intra-state services from its 128 bus depots across the State at 7 am on Thursday. As many as 1,683 buses were run on 436 routes across the State. A total of 7,123 seats were reserved by people through the Online Passenger Reservation System in 1,380 bus services operated out of the total 1,683. The RTC earned `19.5 lakh revenue till 3 pm.

Passengers in limited number started arriving at Pandit Nehru Bus Station (PNBS) in Vijayawada from the early hours of the day to reach their hometowns and workplaces. In Krishna region, 110 buses were run on 35 routes. Only non-AC buses are being operated now.  The RTC authorities assigned duties to the bus crew after examining their health condition. At 7:30 am, the first Super Luxury bus to Visakhapatnam left from PNBS with modified seating arrangement to ensure social distancing. As many as 26 passengers travelled in the bus against its seating capacity of 36.

Unlike railways, the RTC authorities didn’t screen any passengers with thermal scanners before they boarded the buses. Instead, they deployed staff at bus stations to ensure that passengers follow hand hygiene by using sanitisers. Face masks were supplied at `10 each for passengers arrived at the bus station without wearing it. To avoid crowds at booking counters and encourage cashless transactions, the RTC made the Online Passenger Reservation System (OPRS) available for passengers to book their tickets from Wednesday evening itself. However, several passengers at PNBS complained that they faced technical issues in reserving their tickets a day before their journey.

Balaram Swamy, a passenger from Vizianagaram, said the RTC authorities should issue tickets offline at the bus station for the benefit of layman. M Sampath, an IT professional travelling to Visakhapatnam, urged the authorities concerned to rectify the technical glitches in the OPRS at the earliest. According to official sources, advance ticket booking for Visakhapatnam was almost full till May 27. A section of passengers objected to operation of RTC buses as non-stop services. After 8:30 am, RTC services to Kakinada, Amalapuram, Srikakulam, Machilipatnam and Ongole resumed. With a number of passengers standing in the queue, the RTC authorities issued tickets for them at the bus.

Meanwhile, the RTC cancelled bus services in Guntur as part of precautionary measures to contain spread of coronavirus. It was decided to resume limited number of bus services in 13 depots of Guntur district, but the RTC authorities took a decision to stop plying of buses in between the towns and cities of Guntur and Vijayawada. They decided to operate 99 buses from 13 depots of Guntur district initially, but cancelled the services after observing alarming situation due to increasing number of corona positive cases. RTC Regional Manager STP Raghava Kumar said they decided to operate six buses from Chilakaluripet to Macherla, but due to lack of commuters they plied only three buses. As majority of routes in Guntur, Tenali and Narasaraopet are in containment zones, the RTC higher authorities directed them to cancel buses. 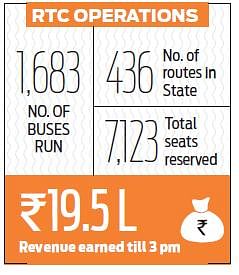 In East Godavari, just a few passengers boarded a bus on the first day of resumption of RTC services. The first bus left for Visakhapatnam from Kakinada depot. From the nine RTC depots, a total of 157 bus services to various districts were operated. The resumption of bus services evoked a poor response from people in Kurnool.  Not even a single passenger used the RTC bus services from Koilakuntla to Allagadda, from Nandyal to Atmakur and from Nandyal to Bethamcherla. Though they planned to operate 126 buses, due to poor response from people only 118 buses were run, said RTC Kurnool Regional Manager T Venkata Ramam. About 1,200 passengers travelled in the RTC buses on the first day. Buses were also run to Anantapur, Kadapa and Vijayawada. In normal times, 850 buses out of the total 897 are operated across Kurnool region and around 20,000 passengers travel in the RTC buses a day. About 25-30 passengers were allowed to travel in each bus ensuring social distancing, the RM added.