However, with recoveries on the day slightly higher active cases remained steady at a little over 21,000.

VIJAYAWADA: Another 2,237 infections were added to the Covid-19 aggregate in Andhra Pradesh on Sunday. However, with recoveries on the day slightly higher active cases remained steady at a little over 21,000. 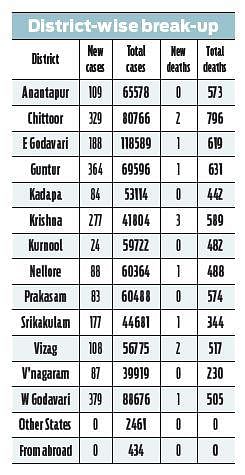 According to the latest media bulletin released by the State Command Control Room, 76,663 samples tested in the 24 hours ending Sunday 9.00 am took the total number of Covid-19 tests conducted by the state past the 86 lakh mark.

Out of the 2,200-odd infections, five districts contributed over half with West Godavari reporting the highest 379 cases, followed by Guntur (364). The daily spikes in five districts were less than 100 with the lowest 24 in Kurnool.

Till date, East Godavari has reported the highest number of positives (1.18 lakh) while Vizianagaram the lowest (over 39,000).

Meanwhile, 2,256 patients were cured in the 24 hours, which took the overall recoveries to 8.14 lakh and brought down active case slightly to 21,403.

At present, seven districts in the state have less than 1,000 active cases even as East Godavari, Krishna, Guntur and West Godavari contribute more than half of the active cases.

On the other hand, 12 Covid-19 casualties were reported after which the toll stands at 6,791.

Three deaths were reported from Krishna district, two each in Chittoor and Visakhapatnam, and one each in East Godavari, West Godavari, Guntur, Nellore and Srikakulam districts.

Now we are on Telegram too. Follow us for updates
TAGS
COVID 19 Coronavirus Pandemic COVID 19 in India Coronavirus in Andhra