Of Rs 5,279.11 crore assistance to be sought, Rs 840.07 crore is for temporary relief and repair works and Rs 4,439.14 crore for permanent restoration of damaged infra

VIJAYAWADA: The state government has pegged the total loss arising out of rains and floods in the State at Rs 6,386 crore.

The government will be seeking Central assistance to the tune of Rs 5,279.11 crore, of which Rs 840.07 crore is for temporary relief and restoration works and Rs 4439.14 crore for permanent restoration of damaged infrastructure.

The Central teams are visiting the State for two days starting Monday to assess the crop loss and other damages due to the floods and rains. The team will submit its report to the Centre for extending necessary support to the State.

The state government prepared a detailed report on the losses to the agriculture and other departments due to the heavy rains occurred in the State during August 13 to October 17 due to four low pressure areas and one deep depression formed over the Bay of Bengal.

Adding to the rains, floods hit Godavari and Krishna rivers due to incessant rains in the upper catchment areas of the two basins in Telangana, Maharashtra and Karnataka, including the tributaries of the two rivers.

According to Special Commissioner, Disaster Management, K Kanna Babu, agriculture crops to an extent of 2,12,588 hectares were damaged. The maximum crop damage was reported in East Godavari (72,571 hectares) and West Godavari (41,828 ha). Paddy was the worst affected with 1,40,485 hectares of crop being damaged followed by cotton in 25,068 hectares.

Other crops that suffered damages are black gram, pulses and sugarcane.

“The total crop loss is estimated at Rs 903.96 crore. As per NDRF norms, Rs 243.66 crore is required towards payment of input subsidy to farmers whose crops are damaged,’’ he explained.

With respect to horticulture, vegetables, banana, papaya and turmeric in 24,516.71 hectares were damaged with East Godavari (7814 ha) and Krishna (6835 ha) districts affecting the most. The total crop loss was put at Rs 483 crore. As per NDRF norms, Rs 357 crore loss is required for input subsidy payment to farmers who suffered crop loss.

The fisheries department suffered losses to the tune of Rs 61 crore, including damages to boats and nets and 2,657 fish and prawn farming ponds to an extent of 5,819 hectares in West Godavari, East Godavari, Krishna, Guntur and Visakhapatnam districts.

Roads laid by panchayat raj department to an extent of 3,125 kilometres were damaged and 33 panchayat raj buildings were also damaged. The loss to the department is estimated at Rs 781 crore.

Despite best possible efforts by the NDRF and SDRF, 45 persons have lost their lives in the floods and rains. The deaths were due to wall collapses, drowning and landslides. Maximum of nine deaths were reported in East Godavari followed by eight in Kadapa, seven each in Kurnool and Visakhapatnam, five in Guntur, four in West Godavari and two each in Krishna and Srikakulam and one in Prakasam. Similarly, five persons went missing — East Godavari two, Krishna   two and Kurnool one.

The Central teams will start their tour in the State from Monday. On Monday, three teams will tour Krishna, Guntur and Anantapur districts to assess crop loss and other damages. On Tuesday, two teams will visit East and West Godavari districts. 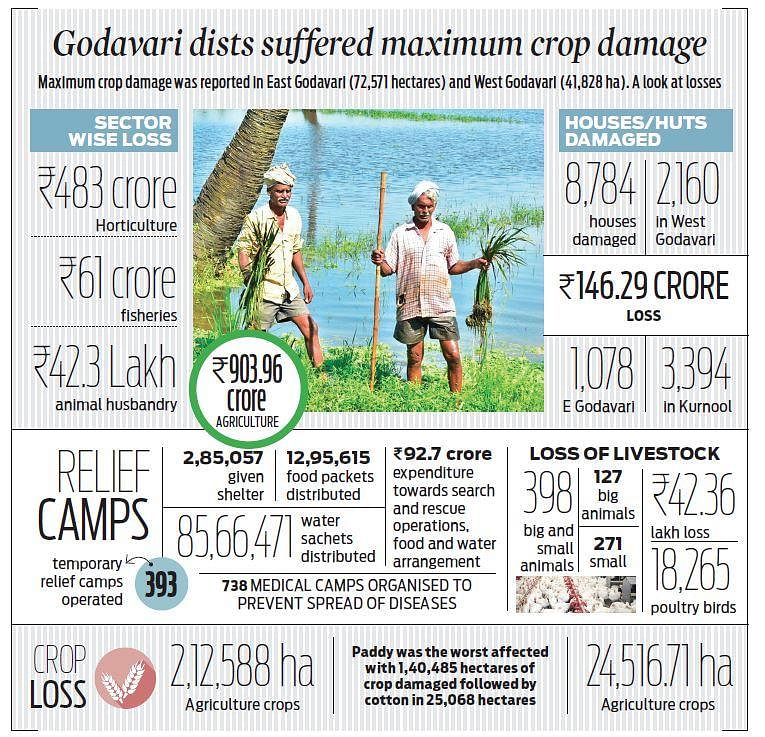