Interest-free loans up to Rs 10,000 will be provided to small and petty vendors in State under the scheme; 10 lakh applied so far

VIJAYAWADA: In continuation of the rolling out of welfare schemes for the benefit of all sections of people, Chief Minister YS Jagan Mohan Reddy is all set to launch on Wednesday the Jagananna Thodu scheme, which aims at providing a helping hand to small and petty vendors across the State.

Interest-free loans up to Rs 10,000 will be provided to small and petty vendors under the scheme and nearly 10 lakh vendors have applied to avail the scheme. The Chief Minister will release Rs 1,000 crore and the amount will be directly credited into the beneficiaries’ bank accounts. 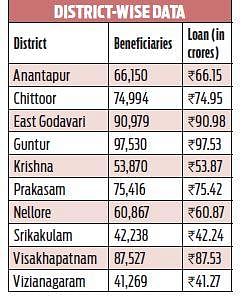 The scheme took shape after YS Jagan Mohan Reddy had seen the plight of  small and petty traders during his 3,648 km Praja Sankalpa Yatra.The objective of the scheme is to free vendors from paying heavy interest to the loans taken from private parties and falling into debts. The banks will be providing loans to all the eligible members and the government will pay the interest of the loan amount to the banks, by reimbursing it to beneficiaries’ accounts.

The State government has also started a special web portal to coordinate with banks and implement the scheme, giving no scope for corruption. The beneficiaries will also be provided with QR based smart ID cards and the scheme will be monitored by SERP, MEPMA officials.Vegetable vendors, fruit vendors, small shopkeepers, pushcart vendors, and traditional artisans are eligible to apply for the scheme.

The volunteers of the village/ward secretariat have identified the beneficiaries in a survey held recently and the list of beneficiaries is being displayed at secretariats for social audit. If any eligible person was not covered under the scheme, he/she can still apply through volunteers.

Jagananna Thodu will ensure that petty vendors and small-time merchants, who operate roadside tiffin stalls, tea stalls, engaged in toy making and other types of handicrafts, are not caught in the debt trap anymore. Identifying beneficiaries under the scheme and extending financial help to them will be a continuous process.

On the eve of the launch of Jagananna Thodu scheme, a big rally was taken out in Srikalahasti on Tuesday evening by petty vendors, hawkers and small-time merchants with Srikalahasti MLA Biyapu Madhusudhan Reddy leading from the front.

The rally was a thanksgiving gesture to the Chief Minister and on the occasion, participants performed palabhishekam on a huge portrait of Jagan. Speaking on the occasion, Srikalahasti MLA described the scheme as a great boon to the poor street vendors. “Under the scheme, interest-free loans of Rs 10,000 per head will be credited to the accounts of beneficiaries, so they can support their business without going to moneylenders for high interest loans,” the MLA explained.

In Srikalahasti, 1,277 small -time traders will benefit from the scheme and get a total Rs 1.28 crore as loan. Majority of the beneficiaries are from minority communities, the MLA pointed out.