The low pollution levels  have been attributed to the good amount of rainfall experienced by Andhra Pradesh in the past few months.

​“The numbers are definitely higher in the months of June, July and August when compared to the lockdown months of March, April and May. However, there is not much increase in the pollution levels,” said PCB junior scientist BV Prasad.

The low pollution levels  have been attributed to the good amount of rainfall experienced by the State in the past few months.

“There were places where it did not rain at all for some months and the levels in those areas for that particular month were high. However, this is only related to a few areas where rains were delayed. But, largely since the State received good amount of rainfall, it has helped maintain the annual average of 60 in each of the areas,” he said.

Explaining as to how rainfall helps reduce pollution levels, Prasad said that water droplets, either when it is raining heavily or it is drizzling, prevent the dust from the surface to mix with the atmosphere. “Rain also absorbs gaseous pollutants and these pollutants dissolve in droplets itself, even before the droplets fall on the ground,” he added.

The Ambient Air Quality Monitoring data collected by the board from January to August this year from 77 monitoring stations established across 20 cities stated that Andhra Pradesh was able to maintain the annual average of particulate matter (PM10) value of 60 micro gram per metre cube.

“Though the data of three months is yet to be gathered and the data for September is yet to be compiled, looking at these figures and past experiences we can easily conclude that the annual average is well within the prescribed levels. The only problem faced by the State is in maintaining the 24th hour values - which means the values taken in every 24 hours. There are several reasons for it. We are trying to identify the most popular reasons for the same,” said Prasad.

However, with increasing number of activities, the PCB official opines that the pollution levels are bound to rise.

“It will not rain after Dasara. Also, more businesses have resumed operations. More private vehicles will ply on roads as entertainment and tourist places have reopened. This will definitely lead to surge in pollution levels. But, we are confident that the annual average of 60 micro gram per metre cube will be maintained,” concluded Prasad. 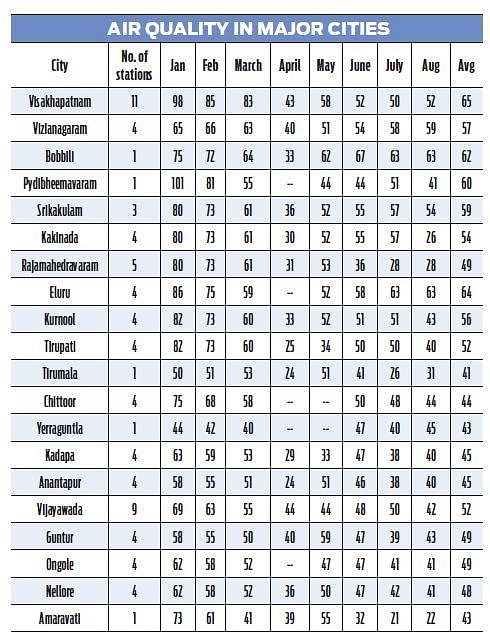 Now we are on Telegram too. Follow us for updates
TAGS
Air Pollution in India