As many as 16 students from East Godavari, seven from West Godavari and two from Visakhapatnam secured the top 25 spots.

VIJAYAWADA: Over 88 per cent of girls and 83 per cent boys, who took the Andhra Pradesh Polytechnic Common Entrance Test (APPOLYCET), cleared the exam, results of which were announced on Friday. The overall pass percentage stood at 84.85 per cent. Only 20,925 of the total 71,631 candidates were girls. All the 9,293 and 2,972 candidates in the SC  and ST categories cleared the test.

As many as 16 students from East Godavari, seven from West Godavari and two from Visakhapatnam secured the top 25 spots. Kadapa district topped the table in terms of attendance percentage (86.55 per cent), while Vizianagaram had the lowest (66.72 per cent). Overall registration also dropped significantly as only 88,372 students registered this year, compared to 1,31,931 in 2019 and 1,34,662 in 2018.

Apart from the 49,989 seats available in private institutions, the tate has 16,155 seats in 84 government colleges and 598 more in two aided colleges. A detailed notification on  web counselling for admissions will be released shortly. The notice through media is to be treated as a call letter for web counselling even if rank card is not received by a candidate. 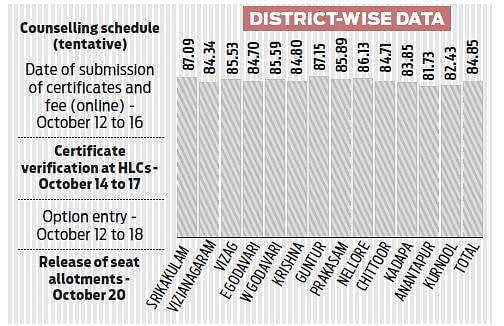 Now we are on Telegram too. Follow us for updates
TAGS
POLYCET