VIJAYAWADA:  With the inflow to Prakasam Barrage falling, the irrigation department has withdrawn the second flood warning level at 1.15 pm, Saturday, three days after it was issued. The flood to other major reservoirs in Krishna basin - Srisailam, Nagarjuna Sagar and Pulichintala - remained steady and is expected to remain so as the projects in the upper catchment areas of the river in neighbouring States continue to discharge water.

At 7 pm, Prakasam Barrage recorded an inflow of 5.42 lakh cusecs. The officials were diverting about 3,000 cusecs using delta canals and the remaining 5.38 lakh cusecs of surplus was being let downstream. 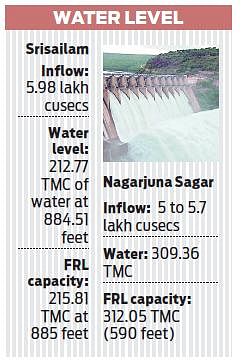 Though the district officials estimated that the barrage would get about  9 lakh cusecs, the trend continued to fall. The Krishna district administration, however, continued to be on alert as the low-lying areas still remain waterlogged and the first flood warning was still in effect.

The first warning will be withdrawn when the outflow falls below the 3.96 lakh cusecs-mark.Pulichintala Project, at 7 pm, was getting 5.62 lakh cusecs and its outflow was also 5.62 lakh. Against its full reservoir level (FRL) of 45.77 TMC, the project has 41.98 TMC of water with a flood cushion of 3.79 TMC.

The flood to Gotta Barrage on Vamsadhara river reduced to 27,000 cusecs and the outflow stood at 28,000 cusecs at 4 pm. In Godavari basin, Sir Arthur Cotton Barrage in Dowleswaram recorded an inflow and outflow of 2.72 lakh cusecs at 6 pm.

As there is a possibility of formation of another low pressure in Bay of Bengal on October 19, the officials said that the rains may once again result in flood. As per the forecast, moderate to heavy rainfall is likely in the State for three-four days from Sunday.

Now we are on Telegram too. Follow us for updates
TAGS
Prakasam Barrage Krishna River