VIJAYAWADA: The State Cabinet on Thursday gave in-principle approval to build two barrages downstream Prakasam Barrage. The two barrages, once completed, will help tap the surplus water which goes into the sea every year when there is flood in the lower Krishna basin. The two barrages, each having a storage capacity of about 3 TMC, are estimated to cost Rs  2,565 crore.

Between June 1 and September 3 (Thursday) this year, 147.63 TMC of water was let into the sea from Prakasam Barrage. Only about 55.34 TMC was tapped. In the previous water year — June 1, 2019, to May 31, 2020 — in which multiple spells of flood were witnessed in Krishna basin, a cumulative of 798.29 TMC of water was left into Bay of Bengal from Prakasam Barrage. The utilisation in the said period stood at a mere 179.91 TMCft. The officials of water resources said that the situation was similar in the preceding years, whenever the river basin had floods, with hundreds of TMC going waste into the sea.

In the previous TDP government’s regime too, two check dams were proposed downstream the barrage, one at Chodavaram and the other 60th km downstream the barrage. The detailed project reports were also prepared for both the check dams with a storage capacity of 2.7 TMC and 4.7 TMC. However, the projects did not take off. The ruling government, which has focussed on tapping surplus water, proposed the two new barrages to address the issue.

Besides the two new barrages, the Cabinet also gave nod for 14 projects — reservoirs and lifts — under the Rayalaseema Drought Mitigation Projects. Perni Venkataramaiah said that even though the capacity of Pothireddypadu Head Regulator was enhanced, the canal capacity still is 40,000 cusecs. “While this is our situation, Telangana has all its projects through which it can draw water from 800 feet level of Srisailam. It can generate power from 796 ft. So, Rayalaseema Drought Mitigation projects will be taken up to meet our water needs,” he said.

The Cabinet also cleared the proposal to construct Varikapudisela  lift irrigation, as a part of Palnadu Drought Mitigation project at an estimated cost of Rs  1,273 crore. It also has passed a resolution to take up Babu Jagjivan Ram Uttarandhra Sujala Sravanthi for irrigating eight lakh acres in North Andhra region comprising Vizag, Vizianagaram and Srikakulam with a budget of Rs  15,389.80 crore and providing industrial and drinking water to 1,200 villages covering a population of 30 lakh. 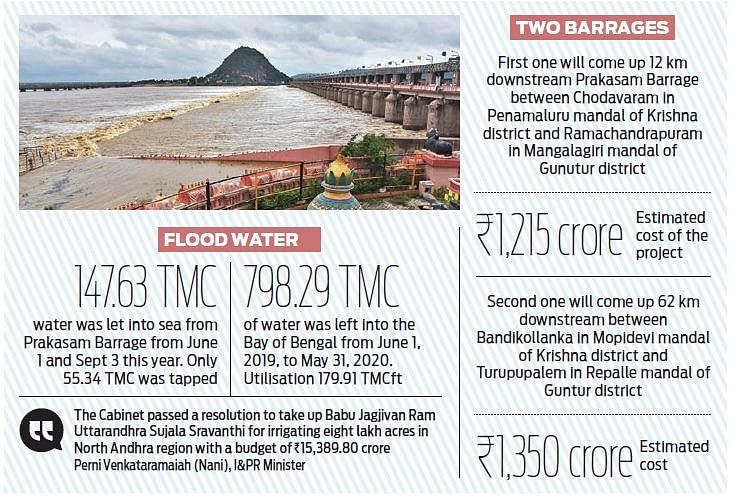 Now we are on Telegram too. Follow us for updates
TAGS
Prakasam Barrage