Stating that he is determined to change the history of women empowerment in Andhra Pradesh, he said women can utilise the money as per their discretion.

Congratulating 87 lakh members of 8.7 lakh women self-help groups (SHGs) across the state through videoconference, Jagan said he kept his promise to reimburse their outstanding loans to the tune of Rs  27,168 crore in four instalments. “The first instalment of Rs  6,792 crore will be credited to your unencumbered bank accounts,” he said.

Stating that he is determined to change the history of women empowerment in Andhra Pradesh, he said women can utilise the money as per their discretion.

“If you want to start self-employment businesses, such as opening cottage industries or purchasing cattle, the government will help you get loans. Agreements have been signed with banks and companies such as Amul, ITC, Reliance, Allana, Proctor & Gamble, and Hindustan Unilever. They will help women by offering training, technical expertise, raw material at low prices, and marketing finished products,” the Chief Minister explained.

A similar setup has been organised under YSR Cheyutha to assist women from the BC community aged between 45 and 60. Interested members of SHGs can contact MEPMA and SERP or village/ward volunteers or call the toll-free number 1902 for help in starting businesses, the Chief Minister said.

“We have reintroduced zero-interest loans for SHGs, which the previous TDP government had discontinued. Legislation for 50 per cent quota for women in nominated posts and works was made to ensure equal opportunities for them,” he added.

Explaining how his government is helping women above the age of 60 years by providing pension, setting up Disha police stations and launching the Disha App to combat crimes against women, he said, “We are also striving to control liquor sales and reduce it in a phased manner.”

Stating that his government has introduced welfare schemes for pregnant mothers and elderly women, the Chief Minister said YSR Sampoorna Poshana schemes were launched to ensure pregnant women, lactating mothers and children (up to six years) get nutritional supplements.

“We introduced the Amma Vodi scheme, under which Rs  15,000 is credited to the accounts of 43 lakh mothers so children can get better educated with English-medium education and become professionals such as doctors and engineers,” he said. “Last year, we spent Rs  6,350 crore, benefiting 82 lakh children. After Intermediate, to ensure there are no dropouts, we introduced Vidya Deevena for full fee reimbursement, under which Rs  1,880 crore dues kept pending by the previous TDP government were cleared and another Rs  4,200 crore of fees were reimbursed to colleges. From next year, the amount will be credited to the bank accounts of the students’ mothers, the Chief Minister said.

Vasathi Deevena was introduced to provide for the accommodation and food of students pursuing higher education, for which Rs  1,221 crore was credited to the accounts of students’ mothers, he said.

Believing that only when children are educated can poverty be abolished, Jagan said his government is revamping schools under Nadu-Nedu, introducing English-medium education and strengthening the rural economy.

“Our government takes pride in the fact that we are partial to women. In fact, we are ready to give 30 lakh house site pattas and register them in the name of women beneficiaries. Some political forces have taken the matter to court, but we are confident of overcoming the hurdle,” the Chief Minister said.
Later, Jagan interacted with women beneficiaries and received their suggestions and compliments.

Support to repay loans
On reimbursing outstanding SHG loans, the CM said, “The first instalment of Rs  6,792 crore will be credited to your unencumb-ered bank accounts” 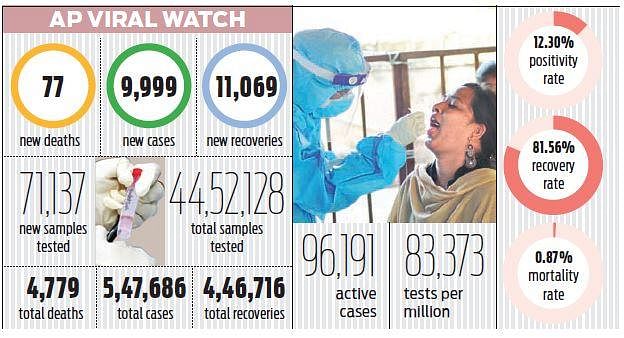 Now we are on Telegram too. Follow us for updates
TAGS
YSR Aasara Jagan Mohan Reddy