The coronavirus spread remained most aggressive in East and West Godavari as both the districts recorded over 1,000 new infections.

VIJAYAWADA: High recoveries have helped Andhra Pradesh bring down the number of active cases to under 80,000 even as over 7,700 Covid-19 cases emerging in the 24 hours ending Sunday 9 am pushed the total number of infections reported so far to 6.25 lakh.

According to the latest media bulletin released by the State Command Control Room, as many as 70,455 samples were tested between Sunday and Monday, of which 7,738 returned positive. The coronavirus spread remained most aggressive in East and West Godavari as both the districts recorded over 1,000 new infections. As many as 1,260 and 1,005 persons tested positive in East and West Godavari districts, respectively; Prakasam (869) and Chittoor (794) followed. The spike in cases in the remaining districts was less than 600. 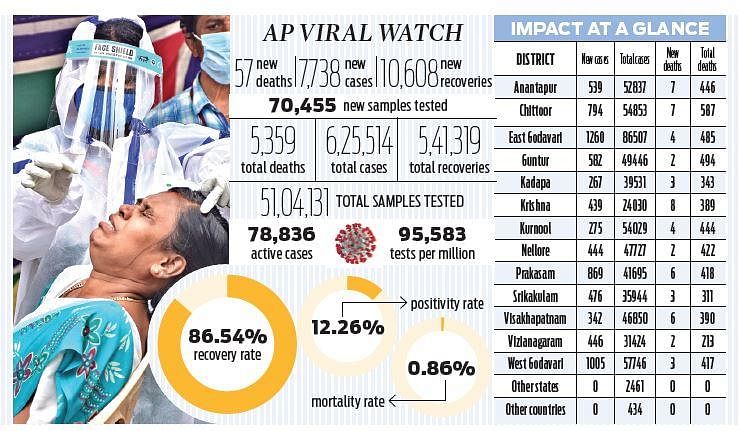 While Kurnool and Kadapa recorded less than 300 cases, Krishna, which earlier showed a decline in cases, recorded 439 new infections. With around 25,000 cases, Krishna has the least caseload in the state.
Meanwhile, more than 10,000 patients were cured and discharged from hospitals across the state, after which only 78,836 active cases remained.  So far, 5.41 lakh people have recovered in the state. Anantapur has the lowest number of active cases — 3,035.

In East Godavari, after the recovery of 73,000 patients, around 12,000 people are still being treated for the novel coronavirus. The number of people who succumbed to the disease in a day too came down. A total of 57 new casualties were reported after which the toll stood at 5,359. Krishna district accounted for the most number of deaths in the 24 hours with eight persons succumbing to the virus followed by seven each in Anantapur and Chittoor, six each in Prakasam and Visakhapatnam, four each in East Godavari and Kurnool, and three each in Kadapa, Srikakulam and West Godavari.

275 new cases against 700 recoveries in Kurnool

Kurnool district has crossed the 50,000-mark in overall recoveries of coronavirus patients. Of the total 54,029 positive cases, including 275 fresh cases reported on Sunday, 50,402 patients have been cured and discharged from hospital, leaving just 3,183 active cases, according to the officials

As many as 342 Covid cases were recorded in Visakhapatnam on Sunday against 451 a day earlier. The new additions took the total count in the district to 47,366. Six more persons died, after which the toll stands at 363. On the other hand, 418 persons were discharged, according to special officer Covid 19 for Srikakulam, Vizianagaram and Visakhapatnam districts PV Sudhakar.

As many as 42,569 persons have been discharged from hospitals, leaving 4,434 active cases. division, 23 new cases were reported. Even as a total of 1,285 persons from there tested positive till now, only 417 are being treated for Covid-19 (as on Sunday).