VIJAYAWADA:  Andhra Pradesh recorded 7,293 new cases on Saturday, taking the total Covid-19 count past 6.68 lakh. However, with the number of recoveries more than the new cases, the active cases in the State are just over 65,000.

According to the media bulletin released by the State Command Control Room, 75,990 samples were tested in the last 24 hours ending Saturday 9 am and of which 7,000-odd tested positive. East Godavari, West Godavari and Chittoor accounted for almost 3,000 of total new cases. 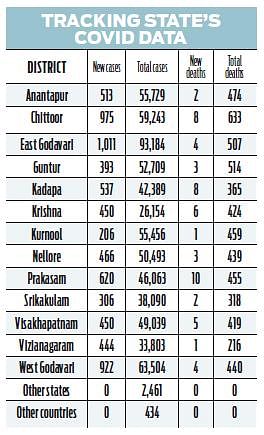 East Godavari continued to top the list with more than 93,000 cases, followed by West Godavari with 63,000-odd cases. Krishna recorded the lowest number of 26,154 cases. The recoveries, on the other hand, continued to stand on the higher side than the new cases. As many as 9,125 patients recovered from coronavirus and got discharged from hospitals in the State.

With this, the total number of recoveries is more than 5.97 lakh, while the active cases stood at 65,794. Kurnool got the lowest number of 2,134 active cases. Meanwhile, 57 more deaths were recorded in the State in the last 24 hours, taking the Covid toll to 5,663.

Now we are on Telegram too. Follow us for updates
TAGS
Andhra coronavirus cases covid 19 recoveries