As many as 20 ancient stone inscriptions were found in Srisailam temple town on Wednesday. 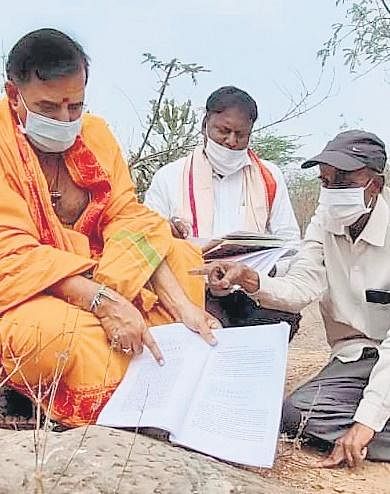 KURNOOL: As many as 20 ancient stone inscriptions were found in Srisailam temple town on Wednesday. These inscriptions may date back to 2000 BC, officials said.Speaking to TNIE, Sri Bramaramba Mallikarjuna Swamy temple executive officer KS Rama Rao said he along with temple expert — Telugu university professor Chandra Sekhar Reddy — inspected Vibhuti Matam and Rudraksha Matam areas and identified these inscriptions at different spots.

The entire area is cordoned off and special permission was sought from the government to excavate the area, he added.However, no such inscriptions were reported in Srisailam earlier, he said. These inscriptions indicate the great history of Srisailam temple, the EO stated.More such inscription will be found if excavations take place in the said surroundings, he hoped.