VIJAYAWADA: Andhra Pradesh witnessed a sharp spike in Covid-19 with 2,331 new cases in the past 24 hours ending 9 am on Wednesday taking the overall cases past the 9.13 lakh mark.This is the highest spike in cases after nearly five months. On November 8 last year, the State reported 2,200 cases. The past 24 hours saw a jump of over 400 new infections when compared to Tuesday’s tally of 1,941. The fatalities too were on the higher side with 11 persons succumbing to the virus.The 2,300-odd new cases emerged from 31,000 tests conducted. 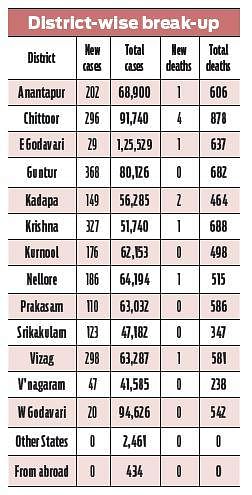 The virulent spread of the virus was witnessed in 10 districts as they clocked more than 100 new cases with the highest of 368 in Guntur. On Tuesday, six districts of Guntur, Krishna, Nellore, Chittoor, Srikakulam and Visakhapatnam accounted for more than 100 cases but by Wednesday, Anantapur, Kadapa, Kurnool and Prakasam districts also reported 100-plus infections.Kadapa, which on Tuesday reported 74 cases, has recorded almost double with 149 new cases. Similarly, Prakasam reported 110 new infections as against Tuesday’s 59. The spike was massive in Anantapur district with 202 new infections as against Tuesday’s 71.With the addition of 298 new infections, the overall cases in Visakhapatnam have went past the 63,000-mark.

The twin Godavari districts and Vizianagarm are the only three districts, which reported less than 50 new cases. Chittoor continues to have the highest active cases (2,227) followed by 1,951 in Guntur.From seven fatalities on Tuesday, the deaths in the State in a day have rose to 11 with Chittoor alone accounting for four fatalities followed by two in Kurnool and one each in Anantapur, East Godavari, Krishna, Nellore and Viskahapatnam.

Now we are on Telegram too. Follow us for updates
TAGS
Andhra Pradesh Covid-19