VIJAYAWADA: Covid-19 tally in Andhra Pradesh went up to 8,85,437 with another 203 new cases reported in the last 24 hours ending 9 am on Tuesday. With another 231 patients discharged from different hospitals during the period, the total number of recoveries increased to 8,75,921. The lone casualty in the last 24 hours increased the toll in the State to 7,134 and the total number of active cases in the state now stands at 2,382.

According to the media bulletin issued by the State Command Control Room on Wednesday, 44,679 confirmatory tests were conducted in the last 24 hours, taking the total number of tests so far to 1,24,41,272. The highest number of 41 cases was reported in Guntur district followed by 30 cases in Krishna and 27 in East Godavari. A total of seven districts reported less than 10 cases in the 24 hours with Nellore and Prakasam districts reporting the least number of cases, two each. 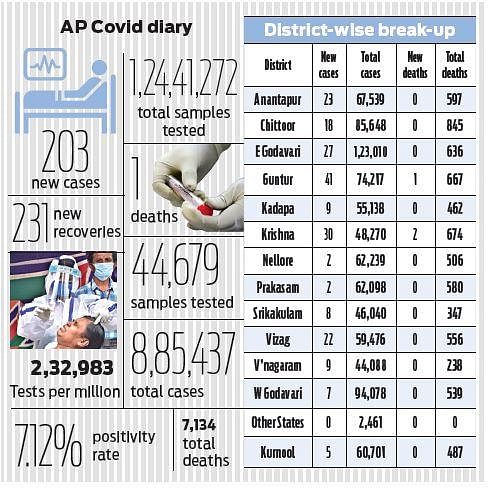 Now we are on Telegram too. Follow us for updates
TAGS
Andhra Pradesh COVID 19