As many as 15,394 village defence squads have already been formed and the remaining 7,862 squads will be set up soon.

VIJAYAWADA: Police station level communal harmony committees and 23,256 village defence squads are being set up, besides round-the-clock surveillance using CCTV cameras and regular policing, as part of a multi-pronged strategy to ensure safety and security of religious institutions in the State, DGP D Gautam Sawang said.

Speaking to mediapersons here on Wednesday, the DGP said the Police Department, which is duty bound to maintain law and order, is leaving no stone unturned to ensure communal harmony in the State. “The government has already set up State and district level committees for communal harmony. Taking it a step further, we are setting up such committees at police station level, besides forming village defence squads,” he said, while seeking the cooperation of people to effectively maintain law and order in the State. 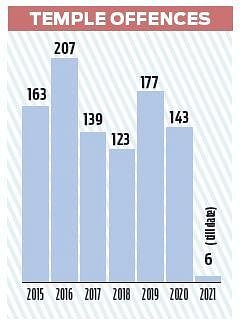 As many as 15,394 village defence squads have already been formed and the remaining 7,862 squads will be set up soon. The aim of the defence squads is to rope in youth to keep a vigil on religious places and ensure that no outsiders resort to temple vandalism, he said. Taking exception to the aspersions being cast on the Police Department by some people, the DGP said in his 35 years of service he has not seen such allegations, which is very unfortunate.

“Police go by and are governed by the Constitution and the law of land and not by any other factor such as caste, creed and region,” he said.The DGP who found fault with those who are making baseless allegations against the police questioning their efficiency, said the allegations are being made without getting facts right.

As to what police have been doing after the unfortunate incident of temple chariot burning at Antarvedi on September 5, 2020, Sawang said, “It is being done in a systematic manner. The police have started evolving an effective strategy to prevent temple vandalism.”

On Ramatheertham incident, he said the idol was vandalised in a structure located on a hillock 2 km away from the main temple. In a security audit done three months before the incident, it was found that the main temple has 16 CCTV cameras and installation of another 16 CCTV cameras was recommended. There was no electricity connection to the structure on the hillock at that time. It was given three days before the incident.

“We were making arrangements to set up four CCTV cameras at the structure when the incident took place,” the DGP said. In the past five months, the police have rounded up 1,635 temple offenders and 2,979 communal suspects. In the due course of investigation, 180 old cases were detected and 337 accused arrested, including seven inter-state treasure hunt gangs. “Of the total 44 major incidents that took place after September 5, 2020 in the State, 29 have been solved and 80 accused arrested. The newly formed SIT is probing the remaining 15 cases,” he said.

Refusing to speak on allegations of political leaders, the DGP asserted that the police are discharging their duties efficiently. “When people were in their houses during the lockdown, police were on their job to maintain law and order despite the risk of contracting virus. They rose up to the challenge and performed exceedingly well, even as 14,340 police personnel contracted the virus and 109 fell prey to it,” the DGP said.

Now we are on Telegram too. Follow us for updates
TAGS
temple vandalism