Andhra Pradesh is one of the States where the Covid-19 vaccine wastage is around 10 per cent.

VIJAYAWADA: Andhra Pradesh is one of the States where the Covid-19 vaccine wastage is around 10 per cent. In neighbouring Telangana also, it is the same.During his video conference with the Chief Ministers of all the States on Covid vaccination on Wednesday, Prime Minister Narendra Modi said Andhra Pradesh should reduce the vaccine wastage so that more people could be vaccinated.

According to the Medical and Health Department officials, the wastage of Covid -19 vaccine has increased after the commencement of vaccination of people above 60 years of age and those in 45 to 59 age group with comorbidities.

Explaining the reason, Visakhapatnam District Medical and Health Officer Suryanarayana said 20 doses of Covaxin come in a box and once it is opened, all the doses need to be administered to people within four hours. In case of Covishield, 10 doses of vaccine are put in a box and all of them need to be administered within the stipulated time of four hours after opening it. After four hours, the unused doses should be discarded, the DM&HO said.

When the vaccine was administered to health workers and frontline staff, there was not much wastage as beneficiaries used to come in good numbers and the vaccination drive was a planned one. In Vizag alone, in the first two phases, 6,000-7,000 people were vaccinated a day on an average. However, once vaccination to the general public began, the wastage has increased. Wastage of vaccine up to 1.1 per cent is permissible, he said, adding that wastage in Visakhapatnam was between 2 and 2.5 per cent only, the DM&HO added.

Meanwhile, the sharp spike in Covid-19 cases continued as the State recorded a daily count of 253 on Wednesday. Guntur witnessed the highest spike of 69 new Covid cases, while  Vizianagaram and West Godavari recorded the lowest number of four fresh cases each. The total caseload of Guntur surged past 76,000 and Kurnool crossed the 61,000-mark.

According to a media bulletin released by the State Command Control Room, 253 new infections emerged from 30,716 samples tested in the past 24 hours ending  Wednesday 9 am. The total number of active cases increased to 1,694 with the decline in new recoveries compared to fresh cases. Chittoor has the highest number of 480 active cases, while the caseload in Vizianagaram is the lowest with 19. One fatality was reported in Guntur taking toll to 673. Chittoor recorded the highest number of 857 fatalities, while the toll in Vizianagaram was the lowest with 238. 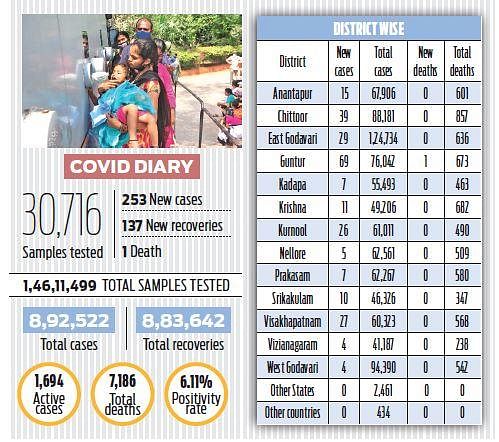 Now we are on Telegram too. Follow us for updates
TAGS
Covishield Covaxin Andhra Pradesh coronavirus COVID vaccine COVID-19 Coronavirus