With the bypoll in neighbouring Goa ending on a happy note for the BJP, the party’s Karnataka leadership is preparing to try its hand at resolving the Mahadayi river water dispute.

BENGALURU: With the bypoll in neighbouring Goa ending on a happy note for the BJP, the party’s Karnataka leadership is preparing to try its hand at resolving the Mahadayi river water dispute with Goa and Maharashtra.

A BJP  delegation led by party state president B S Yeddyurappa and Union ministers H N Ananth Kumar, D V Sadananda Gowda and Leader of the Opposition  in Legislative Assembly Jagadish Shettar will soon call on the Chief  Ministers of Maharashtra and Goa to convince  them to arrive  at an amicable solution to the vexed river water dispute.

Announcing this after a meeting of senior leaders of state BJP, Yeddyurappa said: “We  will try to convince the two chief ministers to concede drinking water but at the same time, I want our Chief Minister  Siddaramaiah to convince his party leaders who are in the Opposition in  those two states.”

Earlier, the issue was discussed during the  recent visit of BJP national president Amit Shah to Bengaluru and the  initiative is being taken up by Yeddyurappa following a green signal from Shah.

According to sources, the party leadership sees it as an issue  that could prove a game changer in the forthcoming Assembly election if  Mahadayi dispute is resolved amicably through talks with Goa and Maharashtra’s BJP Chief Ministers. 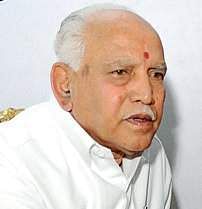 “The  BJP will issue a chargesheet against Siddaramaiah government  highlighting rampant corruption, collapse of law and order and  mal-administration. It would be distributed to the people shortly in the  form of booklets,” Yeddyurappa said.

“The party is in the process  of collecting and collating cases of corruption in various departments  as well as the government’s collusion with the land mafia which would  also be a part of the chargesheet,” he added. “We will expose before the people how diabolical this government is as it has hushed up the controversial  death of DySP M K Ganapathy and make it look like a suicide,” Yeddyurappa said.