Defence Minister Arun Jaitley will inaugurate the multi-agency facility near Challakere in Chitradurga dist on Sunday.

The country’s first of its kind Aeronautical Test Range (ATR) with a mega multi-agency complex for integrating and testing various Unmanned Air Vehicles (UAV) will be unveiled by Defence minister Arun Jaitley on Sunday.The ATR built at a cost of `1,300 crore in Varavoo Kaval near Challakere in Chitradurga district will have technical infrastructure on 4,090 acres and transit and residential facilities on 200 acres. The facility will be housing multiple agencies .

Defence Research and Development Organisation (DRDO) of the Ministry of Defence has developed the ATR, whch has been partially operating since December 2010.

With the ATR’s inauguration, DRDO can start testing some of the indigenous products being developed, including the naval and trainer versions of the Light  Combat  Aircraft,  unmanned air vehicles Rustom 1 and 2; and the Airborne Early Warning & Control Systems meant for surveillance.

According to the Ministry of Defence, apart from DRDO, the multi-agency complex will house facilities of the Bhabha Atomic Research  Centre (BARC), Indian Space Research Organisation (ISRO) and the Indian Institute of Science (IISc). 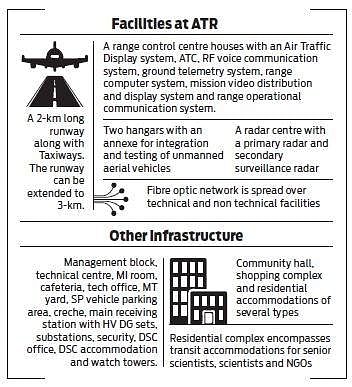 The ATR faced several hurdles before its completion. Local farmers had agitated against land acquisition for the project.

In 2013, work was halted by the National Green Tribunal from 21 August, 2013 to 03 September 2013 after Karnataka State Pollution Control Board (KSPCB) had withheld the ‘Consent for Establishment’ (CFE) application.

Later, it issued the CFE after which works resumed.

In 2015, locals had expressed anxiety after a section of media said that Pakistan had claimed that India was constructing a secret underground Uranium Enrichment Plant near Challakere. Later officials had denied the claims.