MYSURU: THE Mysuru royal family is jubilant. On Sunday, the family performed the ‘ S e ema n t a Shastra’ (baby shower) to bless maharani Trishika Kumari, wife of Mysuru maharaja Yaduveer Krishnadatta Chamaraja Wadiyar. The couple is expecting their baby in two months. The public and the media were kept out of the ceremony as Palace officials considered it a family function. Trishika, who hails from the royal family of Rajkot, married Yaduveer in June 2016. Members of Dungarpur palace, seers from Parakala Mutt and palace priests held special pujas recently and blessed Trishika. 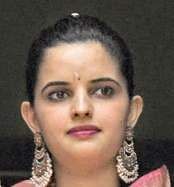 It’s after more than six decades that the family has performed the traditional baby shower. The last time the family celebrated in a grand manner was the birth of Srikantadatta Narasimharaja Wadiyar in February 1953. Mysuru Palace staff then had distributed sugar in trucks and bullock carts in Agrahara and other localities to share their joy. Legend has it that the royal family had gone heirless, believed to be a curse of queen Alamelamma. In 1612 Raja Wadiyar took over Mysore, then under the Vijayanagara Empire, after dethroning an ailing Tirumalaraja.

Tirumalaraja’s wife Alamelamma then took all ornaments and escaped. Historians say she was upset over the Wadiyars usurping her husband. When Wadiyar’s soldiers tracked her down, she committed suicide by jumping into Cauvery river. But not before she uttered the ominous words cursing the Wadiyars to an heirless future. But historian Nanjanraj Urs said there was no Alamelamma. He said Thammaiah Shastry who penned Rajavamsha Rathaprabha had come out with the story of Alamelamma; it has not figured in the second edition in 1897. Srikantadatta Narasimharaja Wadiyar believed that as 16 generations had passed after the curse, he would have a biological son. However, his sudden demise made wife Pramodhadevi Wadiyar to adopt Yaduveer Gopal Raj, son of Swarup Anand Gopal Raj Urs and Tripurasundari Devi.