BENGALURU: THE Yettinahole drinking water project has cleared a major hurdle with the principal bench of the National Green Tribunal (NGT) dismissing an appeal challenging the forest clearance granted by the Centre, for lifting components under the first stage. The order was issued on Thursday in the statutory appeal filed by K N Somashekar who contended that there was no application of mind by the Ministry of Environment and Forests in granting forest clearance for diversion of 13.93 hectares of forest land in Sakhleshpur for works including construction of eight weirs, pump houses, pipelines and installing power supply arrangements.

He contended that the project had failed to address environmental issues and the proposal to fill minor irrigation tanks constituted an irrigation aspect to the project when it was said to be only a drinking water project. The Bench ruled, “While permitting the project activity, as envisaged by the state government of Karnataka, we direct the user agency to proceed with the construction of Yettinahole Phase-1 project, subject to compliance of various conditions and directions in terms of the detailed judgment that will follow and as per law.” The judgment will be issued in a week’s time. While there was no stay on the project during the course of hearing of the case, progress on the `3,716 crore first phase has been slow. Managing Director of Visvesvaraya Jala Nigam Ltd, K Jaiprakash, said 70 per cent of the lift component phase is complete and they expect to complete the rest by January-end. He said two more petitions filed along the same lines were pending before NGT, but they are hopeful those too will be dismissed.

How it will be done

Water is expected to be lifted using gravity canals and pumped via huge pipelines. 8 weirs will be built in the Western Ghats, on the streams Yettinahole, Kerihole, Kadumanehole and Hongadahalla along with pumping stations. 7 storage reservoirs, 10 canals and over 100 bridges will need to be built.

The project also envisages construction of a balancing reservoir at Byragundlu in Korategere taluk, Tumakuru. Seven villages will be submerged due to the construction of the reservoir which will have a storage capacity of 5.78 tmcft and will be spread across 2,000 hectares. A social impact assessment report is being prepared and one meeting has been held with people under the resettlement and rehabilitation plan. Around 3,500 villagers will lose their homes and land for the project. 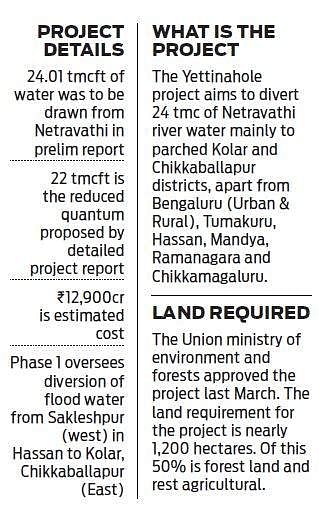