Nikhil Gowda to step in for father who is recuperating, will begin tour in old Mysuru from next week.

By A Sharadhaa and Nandini Chandrashekar
Express News Service

BENGALURU: It is not just Prajwal, but JD(S) supremo Deve Gowda’s other grandson — actor Nikhil Gowda (Kumar) — too will also start campaigning actively starting next week.

Party state president H D Kumaraswamy is out of the touring and campaigning scene till November 1 due to his prescribed post-operative rest and there is a possibility of a further delay by a week if the doctors do not approve. His son Nikhil will step in and tour actively in the traditional base of old Mysuru, while also trying to meet his film commitments next month. 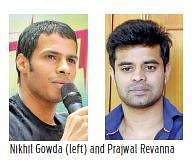 The actor who is shooting for the film ‘Kurukshetra’, plans to start as early as next week. “I will take part in the meeting to be held in Mysuru next week. I am not doing this to become an MLA and MP. It is for people who are missing my dad. My presence will fill the gap. On the personal front, even I have many ideas, and I thought it was time to take up more responsibilities and this is a step forward. But I would like to clarify there is no ulterior motive behind this,” he said.

Nikhil also said his campaign will focus more on the achievements of his father when he was Chief Minister and not on trashing the other parties.  “It is because he worked as CM for 20 months for the people that JD(S) is still alive. For 10 years, the party has been sitting in the opposition and competing with national parties, which is tough. I want to approach the people and spread the message of my fathers’ plans for the next five years and what he will execute if he becomes Chief Minister,” he added.
Nikhil will not take up any film commitments from February to April and will campaign exclusively in Ramanagara, Mandya, Mysuru, Tumakuru, Chikballapur and Madikeri while Kumarswamy, at the same time, will focus more on North Karnataka.

Sources in the party said Prajwal Revanna is almost certain to be contesting from Rajarajeshwari Nagar as it is a strong Vokkaliga belt and he enjoys considerable support there. Even his controversial statements about the party have worked in his favour, insiders insist.

As Anitha Kumaraswamy is keen on contesting from Channapatna, it is unlikely that Nikhil will be drawn into contesting and will be used mostly only for campaigning. “Whatever the talk of a second-rung leadership, it is the still the Deve Gowda family that draws the votes. So everyone in the family including Bhavani Revanna will campaign,” the source said. The family recently got a luxury bus specially readied in Tamil Nadu, to be used to travel and campaign.