A 55-year-old man died after the roof of his house collapsed on him, but he managed to save the lives of his four family members in the city on Tuesday morning.

MYSURU: A 55-year-old man died after the roof of his house collapsed on him, but he managed to save the lives of his four family members in the city on Tuesday morning.This incident took place at Soppinakeri behind Sri Nagaraja Talkies around 6 am. The deceased has been identified as Nagesh Rao,a daily wager. 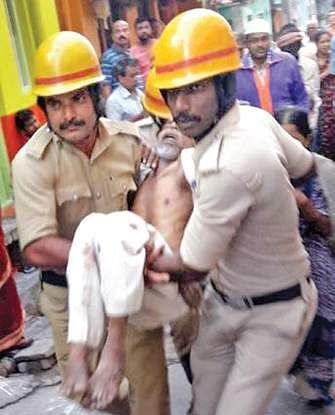 After rescuing all the four people, Nagesh was about to come outside the house when the entire roof collapsed on him. Bharathi who was injured is undergoing treatment in KR Hospital. Nagesh was the only breadwinner of his family. By the time fire personnel rushed to the spot to rescue Nagesh, he succumbed. His house was more than 100-years-old. As it rained heavily a few weeks ago in the city, the walls of the house became week.  Leelavathi said: “My son died to save our lives.”

The National Disaster Relief Fund assistant commissioner arrived at the spot and gave a compensation of Rs 4 lakh to the kin of Nagesh.Tension prevailed after the incident as hundreds of people gathered near Nagesh’s collapsed house and blamed that the incident occurred due to the negligence of the Mysore City Corporation.

MLA Vasu intervened, pacified the mob and told MCC officials to identify dilapidated houses across the city and vacate its residents by providing them compensation.

Stay up to date on all the latest Karnataka news with The New Indian Express App. Download now
TAGS
roof collapses Mysore City