Visitors asked to leave as leopard strays into Mysuru zoo

A zoo employee sighted the leopard sitting on a 40 ft tree tall near the lion-tailed macaque enclosure and informed higher officials at around 9 am.

MYSURU: A leopard strayed into the Sri Chamarajendra Zoo in Mysuru from the Chamundi Hill on Thursday morning. Visitors panicked when the zoo authorities announced the incident on the public address system and asked them to move out immediately.

Staff managed to evacuate the zoo without any problems. The leopard did not harm anuyone.

A zoo employee sighted the leopard sitting on a 40 ft tree tall near the lion-tailed macaque enclosure and informed higher officials at around 9 am.

Vets rushed to the spot and managed to tranquilise and capture the animal by 11.30 am. 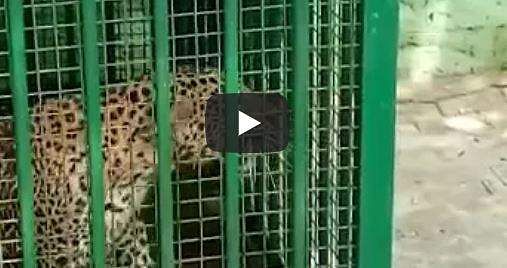 B P Ravi, a member secretary of the Karnataka Zoo Authority, told New Indian Express that the leopard was shot with a tranquiliser by 10 am but bringing down the leopard from the tree proved a herculean task for the staff. Finally, a net was used to bring it down safely.

Ravi said leopards are increasingly straying into urban areas due to an increase in the population of stray dogs and monkeys. “People throw food here and there and monkeys and dogs proliferate in and around the Chamundi Hill. Leopards are attracted by the prospects of prey.” Visitors were allowed back into zoo after the leopard was captured.