BJP set for showdown with Siddaramaiah government over bike rally

The Siddaramaiah government is bracing for a challenge with high political stakes as BJP is set for a showdown.

BENGALURU: The Siddaramaiah government is bracing for a challenge with high political stakes as BJP is set for a showdown. The opposition party has decided to go ahead with its ‘Mangaluru Chalo’ bike rally defying curbs imposed against the rally by the administration apprehending violence.
The district authorities in Bengaluru Urban, Mangaluru, Mysuru and Hubballi-Dharwad have denied permission for the rally citing incidents of violence during such rallies in Manguluru.

Siddaramaiah government’s tough decision to prevent any act that may vitiate peace in communally sensitive Mangaluru, which is limping back to normal after a spate of killings and protests by BJP, RSS, PFI, KFD and other outfits, has set the stage for one more round of confrontation. BJP state president B S Yeddyurappa declared, “We will go ahead with the rally come what may.”

Condemning the government’s decision, former deputy CM R Ashok said, “Siddaramaiah’s Hitler-like stand reminds me of the Emergency days of Indira Gandhi. Our fight against the killings of Hindus in the state will continue. We will take out the ‘Mangaluru Chalo’ bike rally as planned from Freedom Park tomorrow (Tuesday). We will not be cowed down by Siddaramaiah’s threats.”

The rally is scheduled to start from Bengaluru and Hubballi on Tuesday, from Shivamogga, Mysuru and Chikkamagaluru on Wednesday and culminate in Manguluru on September 7 with a massive rally. B S Yeddyurappa and senior leaders are expected to speak at the rally demanding the resignation of district in-charge minister Ramanath Rai, ban on communal outfits like PFI and KDF, and NIA probe into killing of RSS and BJP workers in coastal districts.

BJP, which is determined to consolidate its hold in the coastal districts, has been gunning for Ramanath Rai, the Congress strongman from Bantwal constituency, who has been vocal against BJP and other Sangh Parivar outfits. Rai’s recent controversial acts like instructing police officers to arrest RSS leader Kalladka Prabhakar Bhat, blaming RSS for the killings of some Muslim youths in the coastal region have added fuel to BJP’s ire.

The decision to ban the rally has provided more grist for BJP to attack the government as “anti-Hindu and appeasing the minorities” that has potential for communal polarisation ahead of polls.

The BJP’s strategy to give a pan-Karnataka dimension to its fight against Forest minister Ramanath Rai in the communally charged coastal political turf is set to test the mettle of new Home Minister Ramalinga Reddy. 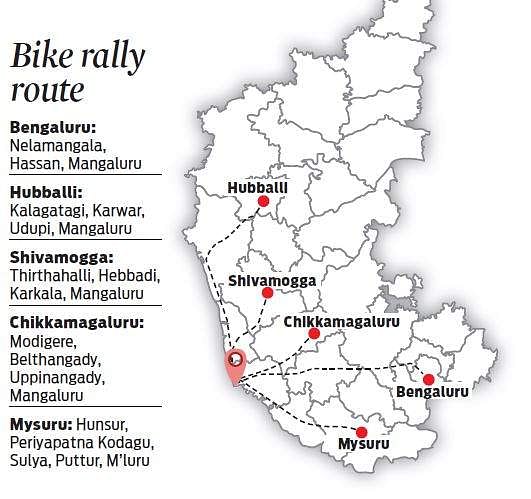 Reddy, who was handed the crucial Home ministry after Chief Minister Siddaramaiah had a last-minute change of plan (Rai was initially tipped to take over the ministry), has been presented with a huge challenge even before he can acquaint himself with the nuances of the department.
The soft-spoken Reddy has been compelled to act tough right away as the CM wants to foil BJP’s plans to consolidate its base in the coastal region by aggressively playing the Hindutva card. The BJP has organised a rally to demand the resignation of Rai for his alleged anti-Hindu stand in the killings of RSS and BJP workers in the coastal region, NIA probe into the killings and ban on organisations like PFI and KFD.

A delegation of BJP leaders, led by Jagadish Shettar, met Reddy on Monday evening and requested him to permit the rally. They assured that it will be peaceful and wanted the goverment to provide security for the rally to prevent any untoward incident. Any miscalculation in handling the situation may force BJP to turn its guns at Reddy, who is just days old into the ministry, and make Congress pay a heavy price in the assembly election ahead.

The event is turning into a showdown between BJP and the Siddaramaiah government as the latter is determined to prevent any untoward incident that could disturb peace in communally sensitive Mangaluru and surrounding areas which had witnessed a cycle of killings and violence recently. Home Minister Ramalinga Reddy has appealed to BJP to abandon the Bike Rally plan and instead turn it into a padayatra or just a public rally

The issue figured prominently at the BJP core committee and Political Affairs committee meetings chaired by Union Minister Prakash Javadekar, who is the party in-charge for poll preparations in Karnataka.

A belligerent BJP state president B S Yeddyurappa, in his initial remarks at the core committee meeting, set the tone for a showdown with the government by declaring, “Nobody can stop the ‘Mangaluru Chalo’ bike rally which is being held peacefully to protest against the communal politics of the Siddaramaiah government which has turned a blind eye to killings of RSS, BJP workers. The fight will continue till Dakshina Kannada district in-charge minister Ramanath Rai is sacked for his conduct which is the main cause for trouble in the coastal districts.”

BJP’s bike rally came up for discussion at the cabinet meeting too on Monday with many ministers demanding a ban on the rally that may disturb communal harmony in Mangaluru which is returning to normalcy after the recent bout of violence. Food and Civil Supplies minister U T Khader reportedly urged the CM not to give permission for the rally in Mangaluru.
Later, speaking to reporters, Siddaramaiah said, “The right to protest cannot be denied in a democracy if it remains peaceful.However, measures will be taken to ensure that the proposed rally does not vitiate peace in society.”

Now we are on Telegram too. Follow us for updates
TAGS
Siddaramaiah government BJP bike rally