Peda,  a popular sweet with milk as its main ingredient, is available in different varieties in the market.

MANGALURU: Peda,  a popular sweet with milk as its main ingredient, is available in different varieties in the market. Now, a farmer from a Ballari village  has added a new variety to the list. Branded as ‘Memory Peda’, this special sweet is made using fully organic ingredients like milk, jaggery and dry copra. 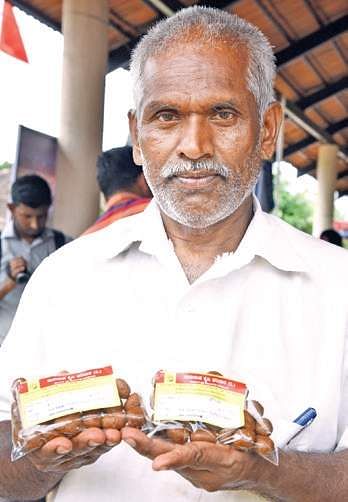 What  made Sajjan HV, a farmer from Hulikere village in Kampli taluk, to come  out with the new sweet is quiet interesting. A year ago, the  progressive farmer thought of boosting his farm income through value  addition by manufacturing Dharwad Peda also known as Thakur Peda. But  the makers of Thakur Peda in Dharwad did not disclose the sweet secret  to him citing patent and loss of business. That did not stop Sajjan and  he came out with his own version of peda after lot of experiments. It  takes eight hours to complete the preparation, he says.

Initially,  he named his product as ‘Naati Chocolate’ (Naati means native) but then  he thought that the word chocolate does not sound Indian and changed it  to Peda. Why call it Memory Peda? Sajjan says that its ingredients have  qualities to boost memory. The ghee content in the milk of local breed  of cows can improve memory while the dry copra milk can help overcome  mental retardation. On the other hand, he says the the milk pedas  available in the market are made out of milk drawn from buffalo or jersy  cows and those who consume it run the risk of attracting diabetes and  blood pressure.

Memory  Peda which is brownish in colour and smaller in size than Dharwad peda  is well received by the sweet lovers. Ever since its launch about six  month ago, Sajjan has sold not less than 100 packets in several organic  melas held across the state including ‘Grahaka Raitara Milana’ that  takes place at Keshava Shilpa at Chamarajapet in Bengaluru every month. The product which costs Rs 600 a kilo is sold in 100 grams packet  costing Rs 60. Sajjan was in a 2-day millet mela which is underway at  Pilikula Nisargadhama in Mangaluru.

Sajjan who also manufactures juices, jams etc said his farm income has gone up  by 3-4 folds wit the value addition. A year ago, he replaced the jersy  cows in his backyard with ‘Gir’ breed of cows brought from Madhya  Pradesh. He sell the ghee made out of its milk to Rs 2,000 a kilo.  At least a half a dozen of his friends too have bought Gir cows.